A Letter From Nanny 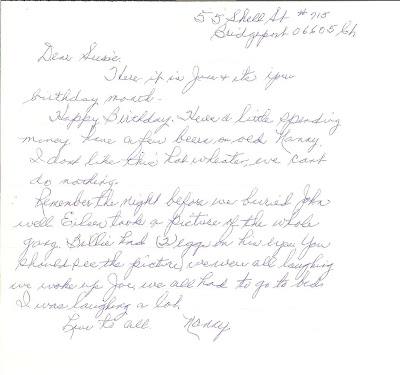 Susan's niece asked to borrow a book last week and tucked inside were two letters from Susan's Nanny.

They were written well over twenty years ago, before any of Susan's nieces were born, back when Susan could still lose ten pounds in a week by staying away from sugar and white bread.

She was a good Nanny; quick to bust out a song or a story about the old days or scare you off with a glimpse of her arthritic toes.

In this letter, Nanny's sending Susan three dollars for her birthday and reminiscing about the weekend the family was together to bury her son, Susan's Uncle Butch.

Somewhere there's a picture of Wild Bill holding eggs up to his eyes and making everybody laugh.
Thanks for the memory, Nanny.
Catch you later.
7 comments:

Susan thinks she's going to enforce a limit on how many words a person can speak to her per conversation. There's just too many she's got to listen to and half of them aren't necessary. This rule is applicable to many of her relationships but she's thinking of a few specific people.

Often she just walks away.

Susan doesn't need to hear extraneous details or listen to the conversator make their point more than once or provide a political opinion or speak on a topic with which they are unfamilar. It's obvious.
Don't make sh*t up and don't brag.
OMG, don't brag.
You will be evicerated.

Recently Susan was present while two co-workers were having a discussion involving space men vacationing on planet earth and a government cover up. Susan recommended that they continue the conversation in private because they sounded f*cking insane.
6 comments: 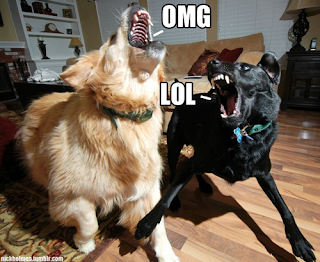 Susan stole this from Nick Holmes.
She thinks she loves him.
5 comments:

You know Susan was just kidding about the soul mates, right?
3 comments:

Susan was reading this post by NieNie which made her recall when the UPS man saw her naked.

Stop her if you've heard this story already.
Well, Susan was totally alone in the house.
Fresh from the shower she went into the kitchen to replay a telephone message. The sunlight was streaming through the windows as she bent over the answering machine,
ass to the door
and heard a quick knock.
She turned around just in time to see the UPS man walk away.
3 comments:

Susan and the husband recently completed sixteen years of marriage and boy, they just flew by. Flew by.
She likes to think of herself and the husband as soul mates. Isn't that romantic?
Soul mates, indeed.

Would you believe her if she said that they haven't had a bad year yet?
Not an entire year.
Portions of some years have been bad
and Susan has not always been happy with her soul mate. Not at all.
But, she she sticks it out with him day after day the same way he sticks it out with her. They have things in common, like watching The Pope of Greenwich Village together, liking half & half in their coffee and having two children.

He's funny when he tells Susan
They are all jealous of our love.
Susan and the husband even made a video of their love. Twice.
Then erased the uninspiring evidence immediately after the initial viewings.

Susan still hasn't found her wedding ring. She stopped looking although she offered the kids $100 if they could find it. Susan assumes that one day a replacement will have to be purchased after which she'd like to renew her vows. The soul mate has already agreed to this.
From that day forward Susan will pay attention to where she puts things.
7 comments:

Susan's daughter told her that she was mean.
It was a few weeks ago while they were standing outside the Chinese Food Buffet,
of which Susan is not a fan, and she was speculating that the size of the patrons' asses would match their plates of greasy spare ribs and fried rice. Susan preferred to think of herself as accurate although she definitely inserted a bit of meanness for her own entertainment.

Days later Susan's daughter told her that she was critical.
The family was sitting at the dinner table and Susan was criticizing someone who didn't think or feel or do things exactly the way Susan does.
Susan is aware that she's critical but to hear it stated so simply from the twelve year old she was teaching by her example was a little startling.

The meanness she could do something about but what would be left of her personality if she could not be critical? There would be nothing for her to say.

Susan is going to give a negative review of George Clooney's new movie, so get ready.

It wasn't as bad as Inception because that would be impossible.

Susan would more accurately liken it to sitting in a waiting room for an hour and forty five minutes without any magazines.

The movie starts out good when George Clooney has to shoot his girlfriend in the back of the head. Oh, no!
Then he builds a gun for over an hour.

At the very end he booby-traps the gun which blows off the side of a pretty face. Neat!
But that was it.
Five good minutes in the beginning and another five at the end. Then he dies.