Susan loves Jersey Shore. LOVES it.
She can't understand what everyone's so crazy about;
who cares that they're dopey and bronzed and get arrested for public drunkenness and have hot tub hook-ups and don't wear underpants and have big boobs and fist pump and tawk like dis and vomit and have questionable decision making skills.

As for making Jersey look bad...it's friggin' Jersey for Crissakes.

Snooki, JWoww, The Situation, Ronnie, et al are delightfully entertaining and Susan will punch you in the face and pull your hair out and talk sh*t behind your back if you don't believe her, b*tch.

No really, Susan was watching it with smoking, Pabst drinking Jesus.
He totally LOVES Jersey Shore too.
6 comments:

Don't you love Susan's smoking and Pabst drinking Jesus?
She saw him over at Friggin Loon and dragged him off with her because that's how she is. She takes whatever she wants,
like when she was twenty three. Plus, a one dimensional Jesus has no power over Susan. None at all.

And, may she update you on the fake birthday nun? The NYS Attorney General has subpoenaed her! Susan may yet get her three dollars back.

Susan's biggest fear, aside from getting Lou Gehrig's disease, is winding up on the front page of the NY Post. Susan can't even imagine how awful it would be to read about any of the stupid things she's done combined with having to look at an unflattering photo of herself. Maybe one showing her jiggly upper arms or waggly neck or just wearing a bad outfit,
although that rarely happens.
It's guaranteed that she'll provide them a quote she wishes she hadn't.

A few years back Susan quite enjoyed reading about the well paid civil servant targeted by the Post. The reporter stood outside his office building & documented how many breaks he took, how long they were and where he went. This poor slob was fired & eventually sentenced to 366 days in jail for bribe taking.

Last month reporters woke up transit workers sleeping on their graveyard shifts and photographed them. Fired.

Susan prefers to live under the radar.
4 comments: 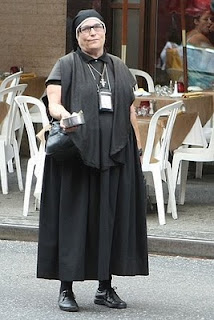 Remember last week when Susan's family was in NYC for the daughter's birthday?
Well, while they were walking in Little Italy they gave three dollars to a nun in a real old school get-up.
Look who ended up on the front page of the NY Post along with this story.
4 comments:

Susan's normally seasonable corner of the universe has been horribly hot and muggy for such a long time she can't even remember when she didn't feel like she was dipped in oil and rolled in salt.

Susan panicked when she found out there might be some record breaking temperatures over the next few days.
Oh, for the love of God.
Enough already!

She created a heat management plan which involved mangoes, ice and extended periods spent floating in the pool. Then she painted her toenails.
2 comments: 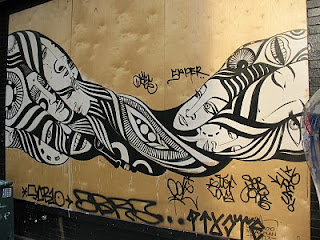 Alright, so nobody liked Susan's street art. That's fine, she likes it enough for everybody. 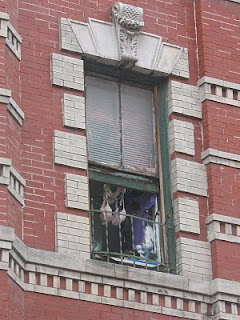 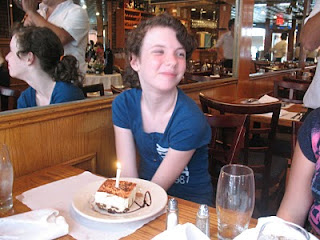 Susan's daughter is turning twelve this weekend and has requested to go to the least interesting place in the world;
Times Square.
Specifically she has requested to visit the Hershey's and M&Ms stores.

The weekend promises to be hot and muggy, perfect for carrying five pounds of melted chocolate, eating crappy grease drenched food and generally being in a bad mood.

Susan, not her daughter.

Susan's daughter will be in a fantastic mood because her mother is going to shower her with fake enthusiasm and treat her like the sweet little queen that she is by letting her do whatever she wants until the budget breaks.

Susan had no idea when she woke up this morning that this would be the first day of her emancipation.

It started quite normally with blue skies, the Sunday papers and children grumbling about having to go back to the church of their mother's experiment after a lengthy absence.

When the family returned home Susan changed into something more appropriate for the summer heat and set about the business of enjoying the day. She took her new birthday laptop out to sit under the shade on the deck and check her e-mail.

Somebody posted something on your Wall and wrote something boring.

Susan f*cking HATES FB and is sorry she ever let her little sister sign her up for it.
She originally thought that it might be a good way to keep track of her nieces who were not always accessible because they had better things to do than anything Aunt Sue could offer them.

Pretty soon some of Susan's cousins had profiles, and her out of state girlfriends, and her children, which started a war with the husband but he backed off, and then everyone else in the universe including Wild Bill's much loathed former spouse who used FB to spy on everyone until they figured out to change their privacy settings.

Unfortunately, no one ever wrote anything interesting unless one finds misspelled tedium with lots of exclamation points interesting.

As a coping mechanism she would prowl FB after hours writing nasty comments on deserving friends' walls, unfriending them one by one.

Today was the day that she reached her limit for insipid blathering and deleted her profile.

Goodbye FB friends, some of you weren't friends anyway, as for the rest,
she'll see you in real life.
6 comments:

Susan was reading a story in the local paper about a man who commemorated the 4th of July by stuffing some explosive shells down a length of pipe and blowing his shoulder off. The arm went too.
Later, she caught the drunken eyewitness interviews on the news.
Oy.
Susan can think of few things more embarrassing than having to tell people that she blew her arm off on the 4th of July.
Yeah man, we were all drunk!
It was a great party up until the arm thing.
You gotta come next year.
5 comments:

OMG guys, Susan was so busy last week throwing out food spoiled by her no longer functioning refrigerator that she never told you about the husband's eldest daughter's visit over the weekend.

The last time Susan saw her was here, and that was a long time ago. Normally Susan is very entertained by the husband's daughter but Susan practically didn't even care that she was coming because Susan was really only interested in the daughter's twin boys. Twin boys!

The parents walked through the front door each carrying a chubbly wubbly nineteen month old in need of a haircut. Interesting distribution of genetics resulted in each boy resembling one of the parents but not each other.

Very quickly it was revealed the neither was going to fall in love with Susan during their short visit.

It was a hot day, Susan was sweating and behind schedule, as she usually is, so she jumped in the shower then ran out to the supermarket. Upon her return she became reacquainted with what it's like to have toddlers in the house. Each was stripped down to a diaper and beyond adorable.
They very suspiciously eyeballed Susan,
one was intrigued but the other wanted nothing to do with her.
Susan knew exactly what he was thinking, Forget this b*tch, mama.

The mother of the twins offered them some hummus, the boys displayed their discerning palates by dipping in their crackers, sucking the hummus off, then dipping them in again until the crackers became too soggy for another trip. This didn't bother Susan, it takes more than sloppy babies to turn her off to food. However, wiping their sticky hummusy fingers all over their bare baby chests was a little yukky. When they climbed up on mommy to wipe their fingers all over her clothes, Susan moved away. That was her limit. The delicate Susan is barely able to hold herself together in the summer heat and found it too hot for twins with messy fingers.

The twins were very charming toddling all over the deck, babbling mama mama mama mama mama mama mama, both hoisting themselves up on her lap at the same time using her shirt for leverage, rubbing their little faces with their chubby hands. Susan made herself an alcoholic beverage with a lot of ice.

A short few years ago when the generation immediately behind Susan began having babies Susan felt sort of pushed out of the way, even though she couldn't have any more babies and she really didn't want any more. Susan understands that she no longer has what it takes to do the grunt work.
That's ok.
5 comments: