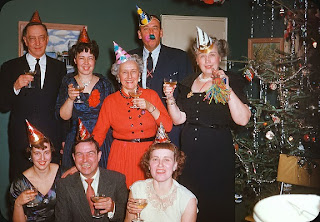 During Susan's BLAHgy Christmas blackout she left her folks' Christmas card on the table for at least two weeks and when she finally opened it a little piece of paper with some numbers and a signature fell out.

A few days later Acme Sweatshop held their fancy holiday party which involved a lot of top shelf liquor. By the end of the evening Susan had lost her eyeglasses.
They were gone.
As if they never existed.

Susan likes to live on the edge and not keep a back up pair. So, twelve hours later she had an eye exam and a $474.95 pair of eyeglasses ordered.

Susan's ability to see things clearly again has been made possible by a Christmas card grant from her mommy and daddy.
1 comment:

On Saturday afternoon Susan dribbled a Skinny Peppermint Mocha down the front of her white corduroy jacket and spent the rest of the weekend scrubbing it out. She's happy to report that the stains are undetectable but she learned a valuable lesson; never order anything with the word skinny in it.
2 comments:

The husband informed Susan that she left the stove on.
'I forget which way to turn the knob' she told him.
He assured her the stove wasn't on for long then added, 'That's what landed my mother to the nursing home, you know.'
2 comments: