Susan effectively avoided small children in Halloween costumes all day, she's got nothing against them, she just wasn't in the mood. She's never in the mood to get up and answer the door all day long while the dog goes batsh*t.

She predicts she won't be in the mood for it next year either.

Susan put her Halloween to good use by getting her hair dyed back to its original color. She was so overdue for a cut & color she started to look like the dude from Rocky Horror. 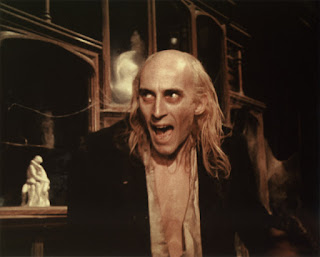 Susan would also like to say goodbye to daylight savings time & hopes everyone enjoyed their theoretical extra hour of sleep.
No comments:

Earlier last week Susan, her two kids, little sister & brother in law attended a memorial put together by the hospice located on the grounds of The Little Caring Hospital for all of the families whose loved ones had passed through that way.

Wow, that was a long sentence.

Anyway, Susan regularly receives their invitations to bereavement support services and events but this is the first time she has taken them up on anything. The memorial was to be held in the hospital's chapel and she was particularly attracted to the option of being able to share 'memories, a poem or a prayer' meaning she would have a captive audience and a microphone.

Susan thought she might like to read the poem her pal Mikel had sent her, one which helped in the early days, and something she still re-reads. There were one or two points within the poem that she didn't specifically agree with, like 'loving being a matter of eternity more than of time', but the rest of it was pretty on target. Susan's big with sharing things that help her ease the burdens of life, whether inspiring others to see the up-side of grief or to wage a deadly battle against ants in the kitchen with a DIY killer (Borax + honey).

The more she thought about it the more Susan realized that she preferred to use the opportunity to tell people about the husband. This was not going to be an improv situation, she would write everything down. She searched her little toy brain for a good story but came up empty. Her brain has not been particularly strong this last year, which she worries may be the coincidentally timed emergence of dementia, but she set aside that possibility and consulted her alter-memory, the archives of Twisted Susan. Very quickly she found this post then adapted it to her current need.

On the way there Susan was looking forward to being back where the husband was so well cared for, but the daughter was not happy as they walked past the hospice where her father died. She removed her mother's arm from around her shoulder and growled like a little broken hearted cub. Once inside she perked up when she saw her aunt & uncle.

Mercifully it was an Inter-Denominational Celebration of Life and not a Catholic service. The program began with a welcoming blessing & candle lighting then a musical interlude by the most adorable acapella chorus of white haired men ever to belt out a churchy song. After this was the celebration of life part where each person who requested to speak was called up to the altar.
The participants were all sad, a few cried, some went against Susan's personal code by winging it, best was the young girl who read a poem about her grandmother. After taking a long walk up the center aisle with all eyes upon her, she stared straight ahead and very clearly read her poem in front of what were probably 200 people, then took that same brave walk all the way back to her seat. She did a nice job.

Sidebar: Susan's son, who was arriving separately, was still not there. (Insert angry mommy Grrrr sound). There will undoubtedly be a meeting with him on this topic later.

Susan and her prepared statement took their place at the front of the room. She looked briefly at the group, announced that she was nervous then in a slightly breaking voice said she's been without her husband for 323 days, that's 44 weeks, and would like to read them a list of things that she liked about him:


The crowd had been chuckling all along but Susan was surprised as hell when everyone applauded, little sister said it wasn't even she who started it.

Susan's son showed up during the Reading of Names; each loved one's name was read as their family members walked up front to hang a sparkly cardboard dove on a tree. Some folks had two entire rows of people in attendance, others only one or two or three. This is where Susan got a good look at how bereaved people were. Many were grim faced. She felt particularly sad for the older folks, grief had really roughed them up.

Let's fast forward to the balance of the night highlights:
Susan's daughter hung their sparkly dove on the highest branch, the old man acapella chorus came back to cheer everyone up, Susan & her family went out for BLTs and milk shakes.

Susan felt like a pathetic wretch of a widow today.

It started when she lost the annual competition she has with herself and turned on the heat. Shivering in her lonely bed all night weakened her resolve. She hit bottom five seconds into the new day and copped some warm thermometer action.

At work she was unfocused and tired, she kept her coat on most of the day, she forgot where she put things, she went downstairs to deliver an envelope then came back upstairs still holding it.

She's preoccupied by her son's collection of points on his recently established driver license & the impact on her insurance, by the letter he received about his college financial aid, and by his inclination to act like a nineteen year old jerk. The husband would have been a big help with the financial aid stuff because he was smart like that. Instead Susan is left to figure out how she's even old enough to have a nineteen year old jerk for a kid.

In the evening the seventeen year old daughter had a college fair to attend. She and Susan walked around not sure what to ask. Susan's brilliant solution was 'We're not sure what to ask, what can you tell us' and little by little they got the idea. It was nice to watch the daughter gain confidence with every conversation. Susan was happy about that but was still overwhelmingly sad because this situation was exactly what the husband was good at; talking to people, getting information and understanding the between the lines stuff.

The 45 minute financial aid workshop knocked Susan out, at the end Susan spoke to the instructor privately about her son's situation then couldn't wait to go home and cry.

She suspects that she may be over reacting so she's going to pull the plug on today, get a good night's sleep & hope that tomorrow will be better.
1 comment:

Susan Has A Cold

Monday she had a funny feeling in her ears
Tuesday her eyeballs itched
Wednesday she started sneezing
Thursday her boss told her to go home
Friday she stayed in bed.
Saturday her head hurt down to her teeth
Sunday she lost two of her senses
Monday her boss sent her home again, so
she went to the doctor.

In the beginning Susan felt scared when she cried, she didn't know how deep the pit was. After a while she saw that she could withstand it, she could walk around in the middle of it and not be swallowed up.

Susan gets shanked by grief. It's always something simple, a song lyric, a line in a movie, a tiny unpredictable thing that triggers a very acute, stabbing memory. She never knows when it will happen. Everything could be going along great, then it flips, and the full understanding of her loss hits her in the heart.

The husband showed her that it was possible for someone to see her at her worst, at her most criminally insane and still love her. Year after year.

Susan doesn't shy away from the hurt, and yet she still doesn't think that she hurts enough.
1 comment: