Susan got up early on a beautiful morning and met her pal, Annie Tumbles* for a bit of yardsale-ing & togetherness after a long absence. Susan drove while Annie Tumbles navigated, doing an exemplary job of sniffing out the best spots in a variety of neighborhoods.

Two minutes into their first stop Susan scored a classic Chemex coffee maker for the preposterous price of three dollars. The husband of the seller, a dude with a bandana and a sharp knife, overheard Susan strategizing how she was going to outline the edge of her deteriorating leather bag with black electrical tape to keep it from tearing any further.

Sidebar: Susan employs black electrical tape as a solution to any number of problems.

The dude was of the opinion that electrical tape would peel off immediately and suggested black duct tape then went inside to get some. The dude had Susan lay her bag on a table and pull the edges taut as he carefully affixed the duct tape then trimmed it with his knife. Susan, Annie Tumbles, the dude and his wife all conversated amiably during the operation after which Susan thanked him by folding a dollar bill into a ring. As she folded his ring she explained that this was a skill taught to her by the husband during the early days of their courtship, and perfected over time on bar tops. The wife considered that to be a good bar pastime 'I never know what to do in bars but get in trouble'.

Even though Susan was in love with these two she had to break up and move on.

At their next stop, a house whose construction looked to be patched together with spare parts, Annie Tumbles took a shine to a mandolin and began negotiations with the old Chinese man occupying the yard until he was revealed to know little English beyond 'Yeah, OK'. His Turkish Son-In-Law came out to give an inflated price for the pretty pear shaped instrument, but even without a sale he was a talker, so he & the girls talked. As soon as he mentioned he had a son Susan wondered aloud what the combination of Turkish & Chinese might look like, so he called inside for his little son to come out and 'meet the ladies'.
Verdict: a near equal fusion of Chinese features & Turkish coloring.

At yard sale #3 Susan paid a dollar for both a wind-up nun & an old timey Mammy salt shaker, had a nice chat with the seller, and met a woman buying a small pair of military wings to place at the grave of her nephew, an Air National Guard Staff Sergeant who was killed in Afghanistan during his fourth tour. Coincidentally, Susan drove past both his wake and his funeral back in January.

Seen on the street: A fella with a crazy Kid 'n Play haircut who caught Susan pointing at him so she thought fast and gave him a thumbs up for that head of hair.

#25 was run by Grizzly Adams' biker grandpa.
There were motorcycles, tires, Harley stuff, semi circular farming tools, a bear rug, a taxidermied pheasant, gauges, small appliances and a soft leather halter adorned with feathers & beads which started a conversation between the girls & Grandpa Adams regarding who might be the likeliest candidate to wear such a thing. On the topic of aging Grandpa said 'We all had our turn.' On the topic of aging & relationships he said 'I told my wife, you were sixteen once, get over it.'

Seen on the street: A gentleman riding a bike with his dachshund sitting up front in the basket wearing a teeny white helmet.

The girls ended up in a consignment mall where they ran into seller #3 while Susan was purchasing a Pee Wee Herman doll for $15. But, their day was not quite over. They still had to get a flat tire then pull over in the shade next to a creek filled with turtles and frogs and little fish and wait for AAA to come rescue them in the form of a strapping young Jamaican fellow named Leons (Yes, Leons). Then they went home. 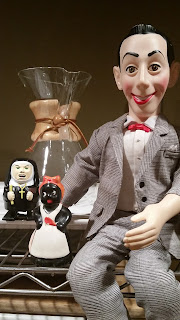 Susan was in the process of stripping the linens off her bed to be washed, as she went along she was thinking of the husband. Once the bed was bare she felt something scrape across her leg to which she immediately thought how the husband would reach out and grab her as she passed by. Twenty five years living together did nothing to diminish his enthusiasm for a quick feel. She looked down to see the Do Not Remove Under Penalty of Law tag and laughed to herself thinking the husband was using it to get her attention. She stopped what she was doing and stood there, letting him make her smile, until her reality flipped and she covered her face with her hands & started to cry.
No comments:

After Susan's 12 year old neighbor pointed out the location of a dead raccoon on her property, Susan gathered her family for a little team building exercise. They met outside where the daughter illuminated the dead raccoon with a flashlight as the son shoveled it into a garbage bag held open by Susan.

On the off chance that your appetite for stories about a dead raccoon has not been sated, click HERE.
No comments:

The other night Susan wanted to make some black bean brownies so she reached up to where she keeps her well used food processor & the lid fell on her head. Susan is not one to let such things occur without a crazy frustrated reaction, so she picked up the inanimate plastic object & flung it across the kitchen where it bounced around before she threw it a second time while cursing. And, when Susan curses you know the term m*therf*cker is in there somewhere.

She calmed down and dumped the ingredients into the processor's roomy 6 cup bowl; black beans, avocado, coconut oil, sugar, egg and cocoa powder but when she twisted the lid onto the bowl then snapped everything together and turned it on nothing happened. The lid has a little plastic piece which, when everything is locked into place, allows the pulse & chop buttons to work. However, when an insane home baker throws it around in a snit little plastic pieces can sometimes break off rendering the entire machine useless.

Over the next few days Susan tried with zero success to find a replacement lid for her discontinued Euro-Pro Quad Blade processor. Her regrettable behavior had ruined a perfectly good kitchen workhorse which, although handed down eight years earlier from her pal Sharon, still had a lot of life to live. Reluctantly Susan vowed to stop throwing small kitchen appliances in anger and ordered a new one.
3 comments:

Susan is excited anytime she has zero plans for the weekend. She is not encumbered by the need to do stuff or see people and beautiful sunny days can just as easily be enjoyed in her own home as out clomping around somewhere.

Saturday afternoon Susan's little sister rang her up to inquire if she had any plans for the evening.
Other than to be left alone, Susan had none. Little Sister further inquired if Susan would like to accompany her to see Elayne Boosler  and possibly sell some tee shirts for her animal rescue.

Some of you may, or may not remember that Susan's little sister is loopy for unwanted hairy mongrels and volunteers for a local animal rescue. You can read all about them by clicking here. Susan respects the passion they have for what they do, but when more than two of them get together the conversation is exclusively contained to dogs & cats. Susan is limited by a very strict five minute attention span for any of this and has actually shouted at her little sister to 'Stop talking about dogs!'

Susan took a shower, got dressed then steadied herself for a long evening.

Little Sister provided Susan with a Last Chance Animal Rescue tee shirt to wear, and what a shocking delight it was to find that she fit into a medium! Susan has not fit into a medium anything for at least twenty years. Upon arrival to the little 1932 era theatre with pinched faced women tending a dissapointing five item cash bar Susan was relieved to find that favorite rescue member Linda was the only other volunteer in attendance. There would be half a chance that she might enjoy herself.

The girls set up a little table in the lobby next to another little table manned by Elayne's husband Bill supporting her own Tails of Joy which raises cash for small, needy & local rescue groups like Last Chance. Bill chatted and joked with the girls the entire time, he also gave them adorable charm bracelets then Elayne came out to chat and joke with the girls, give them her own donation after which they went outside to take selfies. 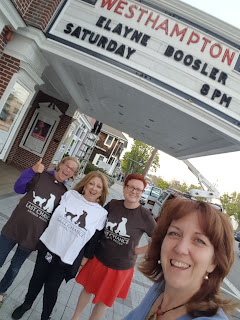 Somewhere in her forties advancing decrepitude robbed Susan of her natural red color. In a curious twist of pigmentation another part of her body sports the exact color she had as a kid, but the top of her head has to get dyed back to an approximation of her original ginger every four weeks. She is always telling her colorist Paula make it more orange and early Saturday morning she did so, but not in a good way. There you have it.

The girls got to watch Elayne's show, and although it was filled with written material, it was really just her on stage talking to people. This included someone who had brought an envelope of pictures from their old neighborhood in Sheepshead Bay initiating a ten minute conversation about who lived in which building, where their families ate, and did he possibly steal her bike. More than once El Boo mentioned that she was now old and fat for which Susan knew she could make immediate improvements by simply dressing her differently.

The girls popped up out of their seats and waved their hands when El Boo gave a shout out to Last Chance inviting everyone to buy a tee shirt or make a donation on the way out. After the show El Boo chatted and laughed with everyone, smiled for as many pictures and signed as many autographs as were requested cheerfully indulging the last fan standing, a crazy cat lady who was sporting the exact toe nail polish as Susan. The girls waved to El Boo and Bill as they walked off into the night accompanied by a college student who was conducting a research project on female comedians. Or perhaps she was the final part of a threesome, either way Susan had no business knowing.

Got a few minutes left? Treat yourself and CLICK HERE.
No comments:

Susan allowed her daughter to attend a classmate's party, one at which the parent or parents would not be present. The daughter texted her mother the address once she arrived and then shortly thereafter requested a ride home, the pickup location changed to a corner in the neighborhood.

Once in the car Susan interviewed her daughter about the modern teenage party.

Concerning the guest list:
I thought it was just going to be juniors and seniors, but there were people who graduated already.
And people who went to jail and got out.

Beverages:
Something disgusting in a gatorade jug

Fun party games:
A kid had two *40s duct-taped to his hands and had to drink them both

Guest behavior:
A kid passed out.

Lastly, Susan asked about the premature end of the party:
The police came


*40 as defined by the Urban Dictionary