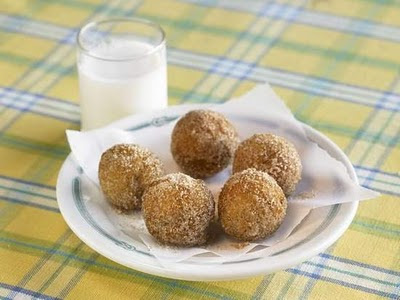 Susan and her daughter made these donut holes yesterday for their dinner guests. Susan ate them till she was sick and now she can't button her pants. Make them yourself if you dare.
6 comments: 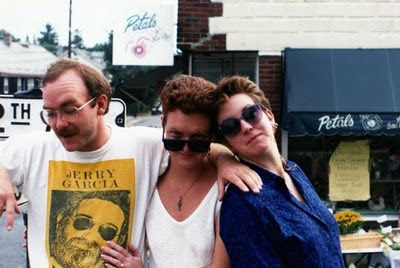 Susan is sort of missing Wild Bill who just up & took off without so much as a text goodbye to his sisters.

But, he's easy to track down and they anticipate that he'll be back in the summer. Hopefully alone.

This photograph of Susan with Wild Bill and their little sister is from way back in 1988 when little sister was
in the family way with the first of Susan's nieces. The photographer, Wild Bill's girlfriend at that time, remains one of Susan's favorite friends and periodic houseguest.

It's also nice to know that the years haven't beaten the sibs up too badly.
2 comments:

Susan would like everyone to send a little love and prayers out to
sweet Dawn.

Susan can't do everything.
She can't work ten hour days at Acme Sweatshop and have time left over to drink sangria and BLAHg.
She can't do it, she's only one person and a very low energy person at that.

Susan employs an alternating schedule of BLAHging or reading blogs or sleeping. Sometimes she has to work in a marital obligation or two and then everything's thrown off.
3 comments:

Susan's done bending over.
She's been bending over for almost five decades and she's through with it. From now on someone else can bend the f*ck over.

Somebody's insane and it's not Susan.

She'll bend over to fill the dog's bowl that's it.
9 comments:

She received a heart shaped box purchased from a real chocolate shop which was tied up with a wide satin ribbon and filled with dark chocolates. Score!

She broke with her selfish protocol by suggesting that the husband present it to both her and the daughter.

Sometimes she does things just to make other people happy.
4 comments:

Susan's son remarked to Susan,
I can't wait till I get a car, know why?

Her brain immediately ran through all the reasons an newly minted fifteen year old might have;

Me and my friends are going to drive to restaurants and tell them it's my birthday so that we get free food.

Susan broke into a BIG smile, danced a little jig and gave silent thanks to the Lord, God Almighty for keeping her son sweet a little while longer.
8 comments:

Susan is delighted to report that she had absolutely zero exposure to the Superbowl on Sunday. Nothing.
No lame commercials, no halftime show. Who was even playing? It could have been the Jets and the Sharks for all she knew.

Susan is smitten, she could watch Nigella cook until the end of time. Nigella is all soft roundness and femininity and cleavage with a little swing of the hair.

Susan and Nigella have a few things in common;
They are the same age!
The both like garlic oil!
They both use a rice cooker!

Susan's friend Fireball surprised her with the most wonderful gift; a BIG bag of dark chocolate covered almonds.

Please indulge Susan as she describes the almonds to you.

First of all, they are AMAZINGLY CRUNCHY. For someone who adores crunchy things, they are the epitome of crunch. Just fabulously crunchy.

Next, the chocolate covering is DARK CHOCOLATE, not that wimpy milk chocolate that everyone loves. Milk chocolate does nothing for Susan, although she has been known to eat more than her share of it. Susan is all about the intoxicatingly dark, barely sweet chocolate.

Lastly, the chocolate is more of a dusting over the almonds than a layer allowing Susan to eat more of them per serving.

The lovely bag of almonds are locked inside the little baby fridge that Susan keeps in her teeny little office. She doesn't have to hide them from anyone, they are there waiting for her whenever she wants. Just for her.

Susan walked past a television set at the exact moment that Oprah was asking Jennifer Lopez how she manages with two little ones at home. She imagines that Oprah was referring to Jennifer Lopez's career making billions of dollars while raising twins.
Jennifer Lopez's started to explain by saying 'Like any working mom...' and that's when Susan's emotional barometer went all the way to HATE.
F*cking dopey b*tch.
7 comments:

As the week progressed and Susan got a handle on things she reinstated the date with Cousin Lisa. Then Susan got a phone call from her pal and periodic house guest, GP who was in town for one night only.

Susan and Cousin Lisa have a long standing history of lengthy conversations and were able to talk through their way through this little blip. Susan apologized and admitted to not knowing what to do after she accepted the invitation then found that GP had driven thirty hours to her side of the country and only had an availability for the same date.

It's certainly easier to reschedule with Cousin Lisa than it is with GP, so is that the criteria that should be employed to determine the answer? Maybe it had been tricky for Cousin Lisa to arrange, maybe she was looking forward to seeing Susan, maybe she just didn't want to give her up.

The outcome was that GP got to watch Susan argue with her family all night over a range of topics including, but not limited to; vacuuming, strawberry jelly and the lack of adequate income.
No comments: