Earlier this summer Susan spent a long weekend at the beach.
How wonderful! you say.
Everyone loves the beach! you say.
Susan loves the beach too, but she hates the sun.
HATES.
The sun can burn out of the sky for all she cares.

Susan's boss at Acme Heaven Sent generously took eighteen of her coworkers to Fire Island. As soon as they hit the ferry Susan's work pals all started shedding their outer layers, turning their faces to the sun and making sounds of profound satisfaction. Susan covered herself up entirely, pulled her long sleeves down over her fingers and accepted the loaner of a ball cap even though it made her look like a dude.

Once there Susan unpacked the essentials needed for a weekend away with grown-ups; alcohol, Tums, Advil, bandages, sunscreen & incense. They would all be used. After a full evening of drinking, laughing and eating the group all collapsed into whatever predetermined situation they would be sleeping; girls with girls, boys with boys, a few of them snoring into the wee hours.

The next morning breakfast was hosted in the courtyard, Susan stepped into the sun and felt as if she would burst into flame. Her work pals were very obliging with giving up their shady seats, it appears that very few people visit Fire Island in order to sit in the shade.

Sidebar: Susan foolishly drank up her daily quota of alcohol in Mimosas.

When everyone started heading to the beach Susan panicked at the thought of being trapped in a sunny horror until hipped by two of her fair-skinned work sisters that beach umbrellas were available. In fact, Susan had but to point and grunt, the umbrella would be delivered & positioned for her.

A beach umbrella was all that was needed to restore Susan's mental health & make her world happy. 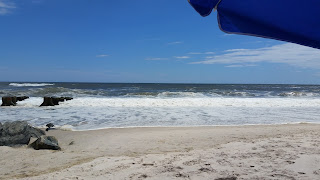 The day wore on in a most congenial manner, the work pals all enjoying each other's company, but there was also a darkness brewing...

Any break in Susan's regular diet often results in digestive upset, and little by little a gassy wickedness was taking form in Susan's delicate tummy. Instead of dispersing, it was building up making Susan expand like a balloon.

Susan was carrying a gas baby.

She tried to abort her gas baby with a handful of Tums. The gas baby just laughed and kicked.
Many suggestions were given but none proved the least bit useful in diffusing the gas baby. Sipping hot water alleviated some of the discomfort allowing Susan to keep from retiring early, which would be her usual remedy. So, Susan stayed up late talking sh*t, playing games, commiserating over a nearly decapitated Big Toe, sipping hot water & joining a search party to locate the drunkest member of her group.

In the morning the toe was still attached, the missing member was back & the gas baby was gone.

Susan is tired right now, so this will suffice as The End.
No comments: