Susan's mother has requested that she put up a new post so that she can stop reading about Susan's ninetieth anniversary. Susan would love to make her mother happy but she's hampered by having no time to BLAHg and by being boring.
And, now she had a head cold.
It's not a terrible head cold, she just can't breathe or taste anything.

She was still able to breathe and taste Saturday night when her girl cousins all made their annual pilgrimage to City Island and Susan ate a black and blue tuna steak. Sunday afternoon she smacked her lips and clapped her hands with delight over a poblano corn chowder. Sunday night's hot toddy was the last thing she tasted before her senses started shutting down.

Hot toddys are very old school, have you had one? It's a shot of whiskey poured into a cup of hot tea with lemon, only Susan substituted Lemon Zinger for actual lemon. They're pretty good.

Anyway, that's the Monday morning report; Susan has a cold.

Oh, and here's a photo of Susan making a yukky face on Saturday night: 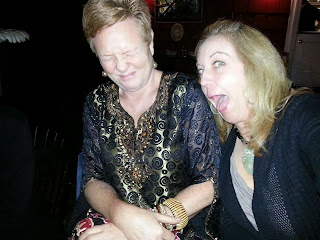 Susan and the husband celebrated their ninetieth anniversary...wait, ninetieth? It only feels like ninety, it's actually nineteen years.
Susan and the husband celebrated their nineteenth anniversary by going food shopping.
She was in the mood for soup so she bought some carrots, two pounds of butter, sweet potatoes, peaches and a bunch of other stuff keeping within her budget.
Tre romantic!

Susan made a peach pie on Saturday morning then she and the daughter ate it for breakfast.
Pie for breakfast is f*cking awesome!
This wasn't one of those lattice topped, egg washed things, Susan's pie was sliced peaches over a simple crust the edges of which were flopped back over the fruit leaving most of it exposed. The recipe was cut from her local paper three years ago and waited until this magical day to come to life.

Susan would be spending another Saturday in the house due to you know why; one car shared by two people with three jobs. She cleaned the kitchen, baked the pie, made a double batch of chili adding cubed sweet potatoes & cinnamon then cleaned her fridge and found she already had two bunches of carrots. One was questionable so she threw it out and was back down to two. She also discovered that mint infused simple syrup does not last indefinitely. Yuk.

Susan's topics are reduced to food when she has nothing interesting to BLAHg about, but you knew that already, and perhaps you've even forgiven her.
4 comments:

Susan spent a lovely Saturday trapped in her house.
In an effort to reduce their expenses she and the husband have been a one car family for well over a year.
Even though it's been a successful experiment, it's been miserably inconvenient. Susan's husband is self employed (don't get her started on that) and the reliability of his schedule isn't guaranteed.
Judge Judy: he gets the car.

Susan spent part of the morning with her formerly absent brother in law. His absence was precipitated by a job offer eight hours away after two years of unemployment. When his job ceased to exist this spring he moved back home. He's kept himself occupied most recently by putting his mom on speakerphone and recreating her recipes. Yesterday he received the best news an unemployed brother in law could get; orientation for his new job starts Monday.
He left Susan a year's worth of Cooking Light magazines from which she tore out two quick dinner recipes, a breakfast, three appetizers, two soups, and a stuffing with fennel, sausage and caramelized apple. The magazines go next to the magazine recycling bin at Susan's library, one of her fave neighborhood stops.

In the afternoon Susan did some standard houseworky things and made pasta with anchovies, garlic, chilies and kale. She doesn't like capers although she'll try them every ten years or so just to make sure. She'll be leaving them out from now on.

During the week she made the most divine tomato sauce with onion and butter which required almost no effort. Really, you dump the ingredients in a pot & turn it off 45 minutes later. She had another dinner time hit with skillet lasagna when she replaced mushrooms with sausage. Susan never really paid attention to sausage until maybe the last two years, but the genie's outta the bottle now. She's also about ten pounds fatter.
3 comments:

Labels: Ain't Got No Car, Recipes

Susan hates to talk on the phone. OMG, making a call is even worse, she puts it off until it becomes a problem. Of course she makes an exception for the Old Folks because it's lame not to call your parents but she makes them wait two weeks too.

Recently Susan was with the husband when he told her to call the kids, she was all Ugh, can't I just talk to them when I see them?

Last night Susan broke down, dialed the phone and talked to her father. They talked about a bunch of stuff like they always do and he told her about this movie playing tonight @ 8pm on TCM.

Today will be a solemn day of remembrance for Susan and by 8 o'clock she's gonna be in the mood to make some pumpkin seed candy then sit down and watch a funny black & white movie recommended by her father. She hopes that she likes it better than his previous recommendation, which she didn't like at all.

Not at all.
No comments:

Susan spent a lovely late summer Sunday on the deck with her dog and the Sunday papers including the sections she's been hoarding since July. At three o'clock guests started appearing in the backyard of the neighbor behind Susan filling the air with party sounds like hummus, ...she was in jail,... and who's wine is this?

Susan's property is wide but not very deep, so the backyard neighbors are practically on top of each other but that isn't an issue because no one treads on the privacy of the other. A few years back when Susan's son embedded his lacrosse ball into the siding of this neighbor's house, the neighbor requested in a most congenial way that it be fixed & the husband went over and did just that.

The hostess provided introductions and a quick who-knows-who. Susan liked eavesdropping on the party, she even got up to make herself some hummus and a cocktail in order to better pretend she was a part of it.
Someone was laughing the way Susan does when she drinks.
Someone else was very keen on determining which of the appetizers was hot.
Another had brought their kid.
Susan got a little jealous when she heard 'Everything is from the farm' and 'I used the Riesling to marinate the shrimp'

The afternoon became very breezy, periodically beaning Susan's deck with an acorn.  Lucy the pitbull had been disassembling the woodpile for weeks and now there were two foot logs all over the yard. The sun inched west illuminating a series of silvery spider webs and the purpley-pink sedum that Susan had transplanted to the dead space of a tree trunk was in full bloom, autumn was coming.

Soon there were too many guests for Susan to follow specific conversations, they melded into one happy murmur punctuated by laughter, the kid crying and the fantastically delicious smell of food being barbecued.

Susan had her own stuff to do so she packed up and went inside.

Susan is going through an austere economic period.

She's been freezing pesto like an obsessed crazy person in preparation for a Laura Ingalls winter.

The daughter accompanied her to the dollar store to purchase two more ice cube trays and a box of ZipLoc gallon freezer bags. Susan had four dollars and told the daughter she'd dedicated twenty five percent of her holdings toward candy.

At the register the lady in front of them was unloading a full cart onto the conveyor belt. The daughter made her pickle face at the prospect of waiting five more minutes to check out. The lady let them go ahead.

Susan put back one of her ice cube trays and reduced her total to $3.26
Susan is a grown woman with a budget of $3.26

It's already been established that Susan got paid on Friday. Four days later she and the husband had twenty three dollars between them to go food shopping. That was it, there was no Pull out your charge card or Let's go tomorrow when we have more money. They had eight singles, a five, a ten, and some change.
Susan made her choices then handed over $22.21

Susan and the husband purchased their house nine years ago and have paid for it a month at a time. Along the way they've done some stuff, nothing grand, mostly just to make it function better. Of course now it's worth less than their mortgage, but just about everyone they know can say the same thing.

Currently their driveway is collapsing. Two years ago the husband re-routed the rainwater coming from the downspout to avoid having it drain onto his neighbor's yard. Instead he diverted it down the driveway into the street washing away the sandy infrastructure supporting the cement.

Susan came home from work and contemplated the front of her house. She knew that somebody could probably make it look good if they spent some money and knew what they were doing. She fantasized about what one of those TV shows that fix up the front of people's houses would do.

She'll break her personal rule about appearing on TV and apply for a makeover from HGTV. She could be just as boring as any of those lame TV moms, fake bickering with the host and ending her sentences with an uncomfortable laugh.

Her dream of getting a TV show to fix up her driveway was short lived, HGTV is currently not looking for anyone in Susan's circumstance but encouraged her to check back often.