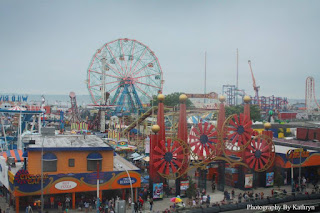 Susan took mass transit all the way down to Coney Island, USA to stand in the rain and watch the Mermaid Parade.

Weeks ago Susan innocently said yes when the daughter asked if they could go, then immediately regretted it. Susan is not a fan of crowds, heat, no place to pee & limited escape routes. The closer the date of departure came, the more Susan dreaded her poorly thought out commitment. How could she deny her fatherless daughter the joy of seeing gay men and half naked women strut their painted and sequined stuff?

She couldn't, that's how.

Mercifully, Susan's little sister agreed to go which afforded Susan some level of comfort. She now had someone onto whom she could pawn off the transportational logistics.

That morning Susan packed her bag with sunscreen, Advil, baby wipes, black bean brownies and cash. She wisely chose her outfit which consisted of layers, although too few to keep her warm after being rained on, and white shorts onto which she would later drop a calamari hot dog.

Coney Island was the last stop on the Q train and pulled in high above the park. Susan felt like Dorothy first glimpsing the Emerald City when she saw the Wonder Wheel and beyond that the Atlantic Ocean. It was quite a sight.

Twelve inch platform shoes, three foot wide headgear, bejeweled eyelashes, and head to toe body paint was in evidence as soon as they hit the street: 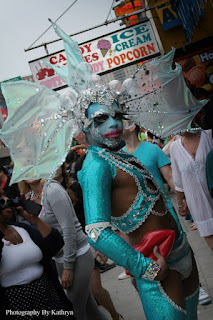 Susan was delighted to see the ridiculous amount of creativity and dedication that went into all the costumes. They were home made with odds and ends, bound together with glitter, fishnets, shells, pearls, streamers, feathers, leather straps, topped with balloons and finished off with pasties.
Like this: 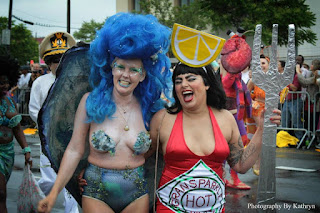 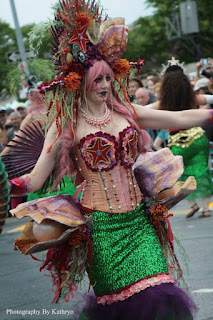 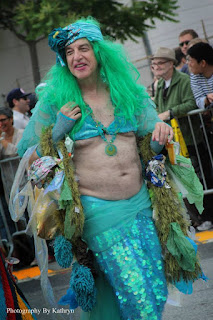 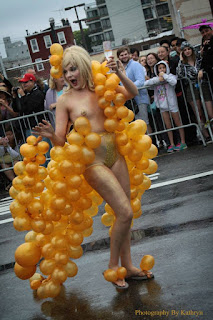 Susan liked the full body commitment of this fellow: 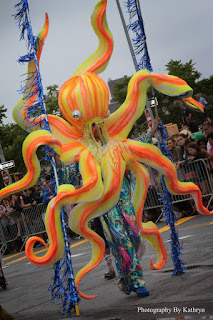 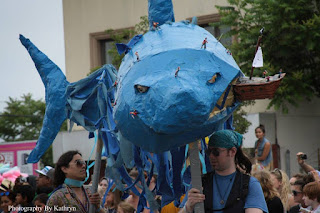 Most of all Susan was happy to see all the unrestrained boobs, jiggly bellies, plump round asses and rolls of fat that every woman over the age of 25 has.

*Susan would like to give artistic credit to her Little Sister, the professional photographer, for allowing Susan to pinch these photos from her FB page.
2 comments:

Susan can't BLAHg late at night because there's little quality control after 1 am, plus she just has to rewrite everything the next day. Even when she's done a good job on her modest assemblage of paragraphs and sends them out into the world, she still sneaks back to edit.

Lately Susan's BLAHging talents have gotten a little stuck. When the self revelatory brilliance she's composing is still a muddle of crap after three weeks she just chucks it. Same with anything that may inspire even a single person to feel sorry for her. There's no reason for feel sorry for Susan except when she has to sit through Super Troopers on Family Movie Night.

Double grieving has taken the fear out of a few things. For example, at work our favorite claustrophobic has taken to hopping on the dreaded elevator just for the hell of it. Sometimes twice a day. She even crawled underneath the deck at home to retrieve some flattened milk containers which had flung themselves out of the recycling bin. This behavior is quite unusual for her.

In the early days of her grief she cycled through misery followed by recovery then normalcy.

Once again she's back to being pretty stable although she cries every day. Quick bursts, multiple times, then she's done until the next time. Which could be two minutes later. Susan doesn't avoid her grief, she tells herself
God grant me the serenity to accept the things I cannot change.
It's been working.
3 comments: