Susan went in to NYC with her little sister and: 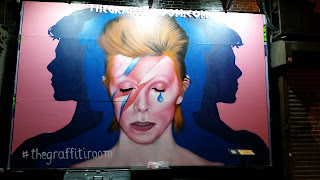 For years whenever Susan ran across a bag of ginger candies she would purchase them for her Cousin Lisa. Susan always considered them to be foul little suckers, but in recent years she's developed a taste for them. The ones she prefers are different from those she would purchase for Cousin Lisa, but that's really neither here nor there, ginger candies taste like ginger.

Cousin Lisa also liked candied ginger, which is actual ginger that has been dried and coated in sugar. Susan had a candied ginger connection in her neighborhood & would periodically bring a bag of it to her cousin. That stopped the day Cousin Lisa graciously accepted a new bag and placed it in her kitchen drawer alongside two previous bags.

Anyway, the anniversary of the day Susan had to give up her beloved Cousin Lisa arrived and steamrolled right over our tender heroine. She sobbed for hours the evening before and when she awoke it appeared as though she was punched in both eyes. She took a hot shower, donned a new dress in homage to her eternally stylish cousin and headed off to work.

When Susan arrived she found something on her desk.

The husband of her office-mate had purchased this for himself, discovered it was not to his liking* but thinking it may appeal to Susan sent it in as a hand-me-down gift;

A bag of ginger candies.


*Gross was the description

I fill the absence
with a thousand reflections,
each a universe