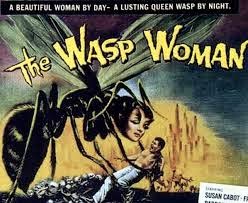 Susan got stung by a wasp twice in less than a minute. Ow! Ow!
As she was being attacked by a swarm of two or fewer wasps she used her awesome shrieking powers in combination with a crazy dual arm protective flailing motion while running away.

Susan's never been stung by anything except skeeters. It may have been payback for an earlier incident in which she murdered a family of wasps. Who knows. She ended up smashing this one too.

Beware wasps! You have now made an enemy of Susan.

Susan was bewitched by this photograph of a raw vegan carrot cake from This Rawsome Vegan Life and made it even though she knew no one in her family would eat it. 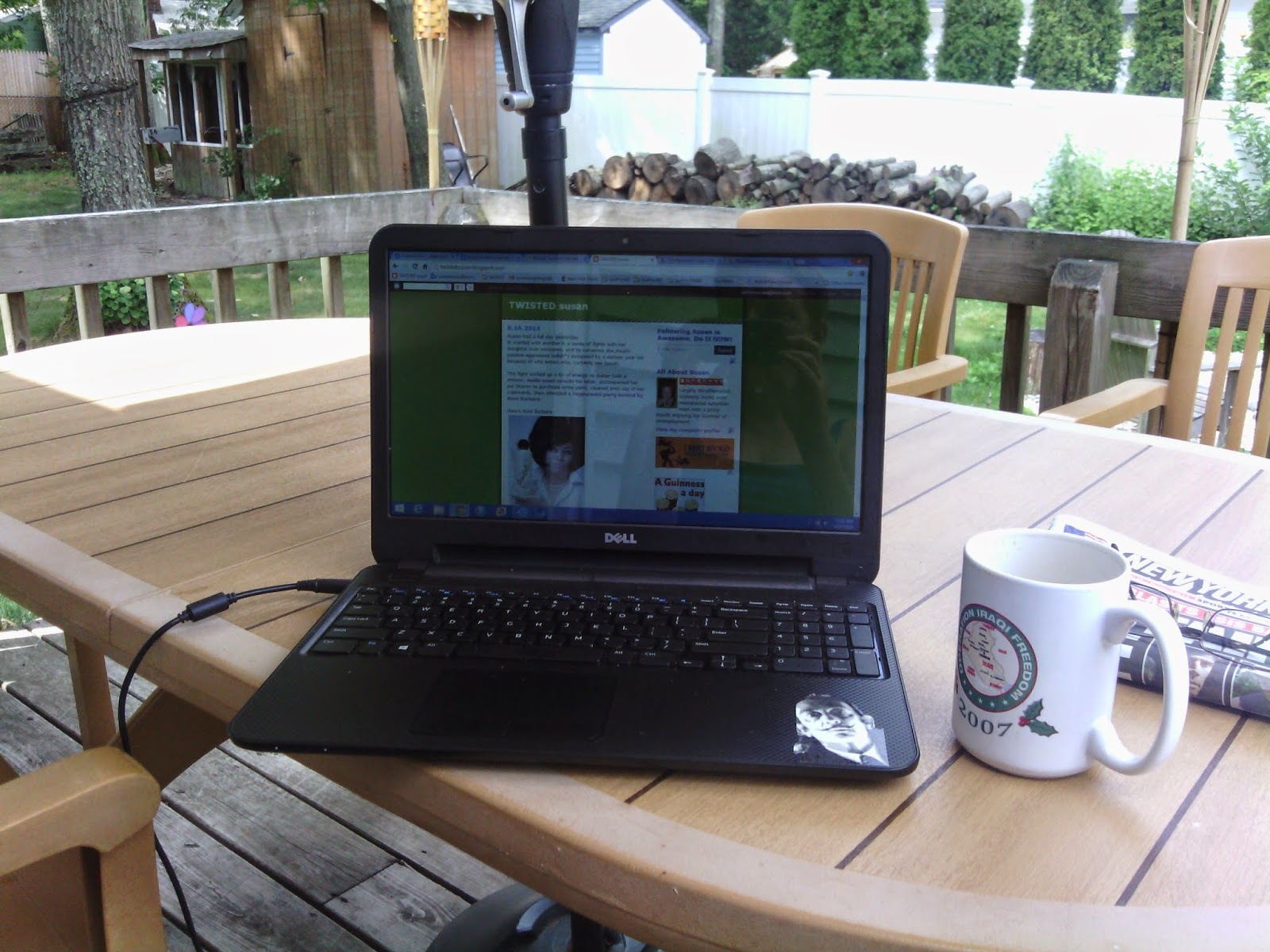 This is Susan's unemployment office. If she's home sitting on her ass, here's where she does it.

From this seat she listens to the birds singing, the leaves whispering with the summertime breeze, helicopters ferrying folks out to the Hamptons and her children declaring that there's no food in the house. Most recently this is where she pedicured herself, had an 84 minute conversation with her parents then figured out how to get a picture from her phone over to her laptop.
All important undertakings.

Susan calculated that today is her 46th day of unemployment. Running the household minus her former paycheck has guaranteed a sour temperament from the housebound daughter. So, Susan took her out to two local towns with main streets. Susan loves towns with main streets! Please notice how she ended that sentence with an exclamation point to emphasize how serious she is.

The first town they visited is where Susan attends her Department of Labor workshops. At first glance it seemed promising, but other than a coffee house with ample seating & an adorable but overpriced natural food store, there was not much to hold the girls' interest so they took a pretty drive along a secondary road to the next town, which is also home to a wonderful famous person.

The second town had a tight little main street filled with gently worn clapboard facades. The girls went in to a tiny, fragrant & friendly health food store where Susan chatted up the owner and spent an extravagant $7.29 on a box of lemon, ginger and mankuna honey tea along with a bar of African Black Soap chosen by the daughter. They went around the corner to an even teenier little ice cream parlor & candy shop where Susan observed a seventy-ish woman walk over from the beauty parlor still adorned with the protective cape and head filled with hair dye. The woman handed over a small package of chocolate covered graham crackers to the teenage cashier as repayment for a two dollar debt loaned earlier in the day. She said the crackers were a favorite when she was a girl. Turning to leave she pulled out a banana, held it up to hear ear like a telephone and instructed I told you never to call me when I was in the ice cream parlor then walked out the door.
Susan would kill for that sort of neighbor at home.

Their final stop was to the United Methodist thrift shop a little farther down the block. This is a fave of Susan's because she always manages to dig deep enough to unearth something neat. Her most magically inspired purchase was probably fifteen years earlier when Aunt Eileen sent Susan out to locate a ceramic coffee filter holder for her friend Linda. You sit it on a coffee cup, fit it with a paper filter, fill it with ground coffee & pour boiling water over it for a single cup of fresh coffee. Susan said she would keep her eyes peeled for such a thing and then found it that same week at the UM thrift shop. For a quarter.

Susan ended the day by almost throwing up in public. She may delve more deeply into that later, but not now.
2 comments:

Susan had a full day yesterday.
It started with another in a series of fights with her daughter over nonsense, and by nonsense she means passive aggressive bullsh*t instigated by a sixteen year old because of who knows why, certainly not Susan.

The fight sucked up a lot of energy so Susan took a shower, made some snacks for later, accompanied her pal Sharon to purchase white paint, cleaned ants out of her cupboards, then attended a Tupperware party hosted by Aunt Barbara.

Ed. note: Susan's friend Sharon would like it noted that the ants were cleaned out of Susan's cupboard, not Sharon's. Sharon feels that point was not clearly made back in paragraph two.
2 comments: 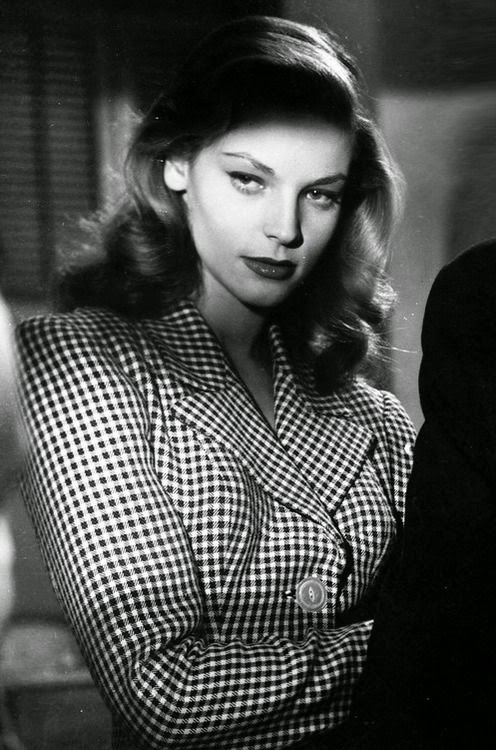 "You know how to whistle, don’t you, Steve? You just put your lips together and blow.”
No comments:

Little sister remarked recently that Susan likes to hibernate. Can Susan help it if she enjoys being home? That's where all her stuff is. She likes getting out and going places too but she can be just as happy having nothing to do.

During periods of personal financial constraint it's good that Susan likes to stay home and do nothing. Of course, she doesn't really do nothing, but it's usually such a low-impact something that it's often mistaken for nothing.

Today she baked real bread with yeast then used a long neglected pint of heavy cream to make butter. Some funny people she knows inquired (a) if she had milked something for the butter and (b) if she were wearing a bonnet.

Susan was all set to enjoy her first attempt at fresh bread, however that's not what she made. The daughter suggested it was similar to a project her brother completed in middle school; an inedible wartime biscuit made of flour & salt. The kid was right.
2 comments:

Susan and her daughter went out to the Parrish Art Museum in Watermill, that's Hamptons traffic, guys. Summer traffic.

Susan was all excited because Maya Lin had two geographical installations exhibited, it didn't make much difference that they were both like eh, Susan's still a fan. During the magical time when Susan worked in NYC she showed countless people Maya's overhead clock in Penn Station.
Anyway, here are Maya Lin's contributions: 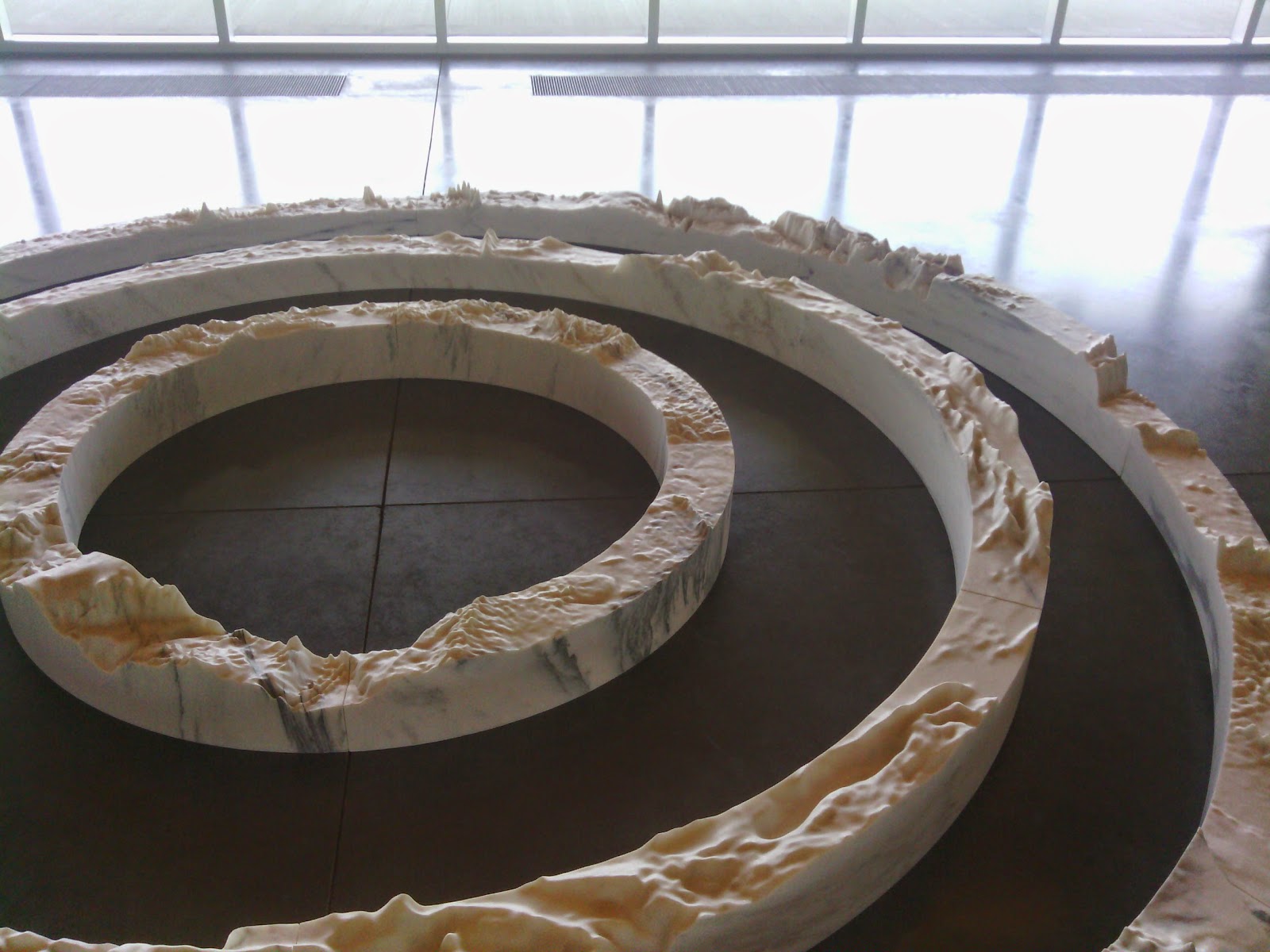 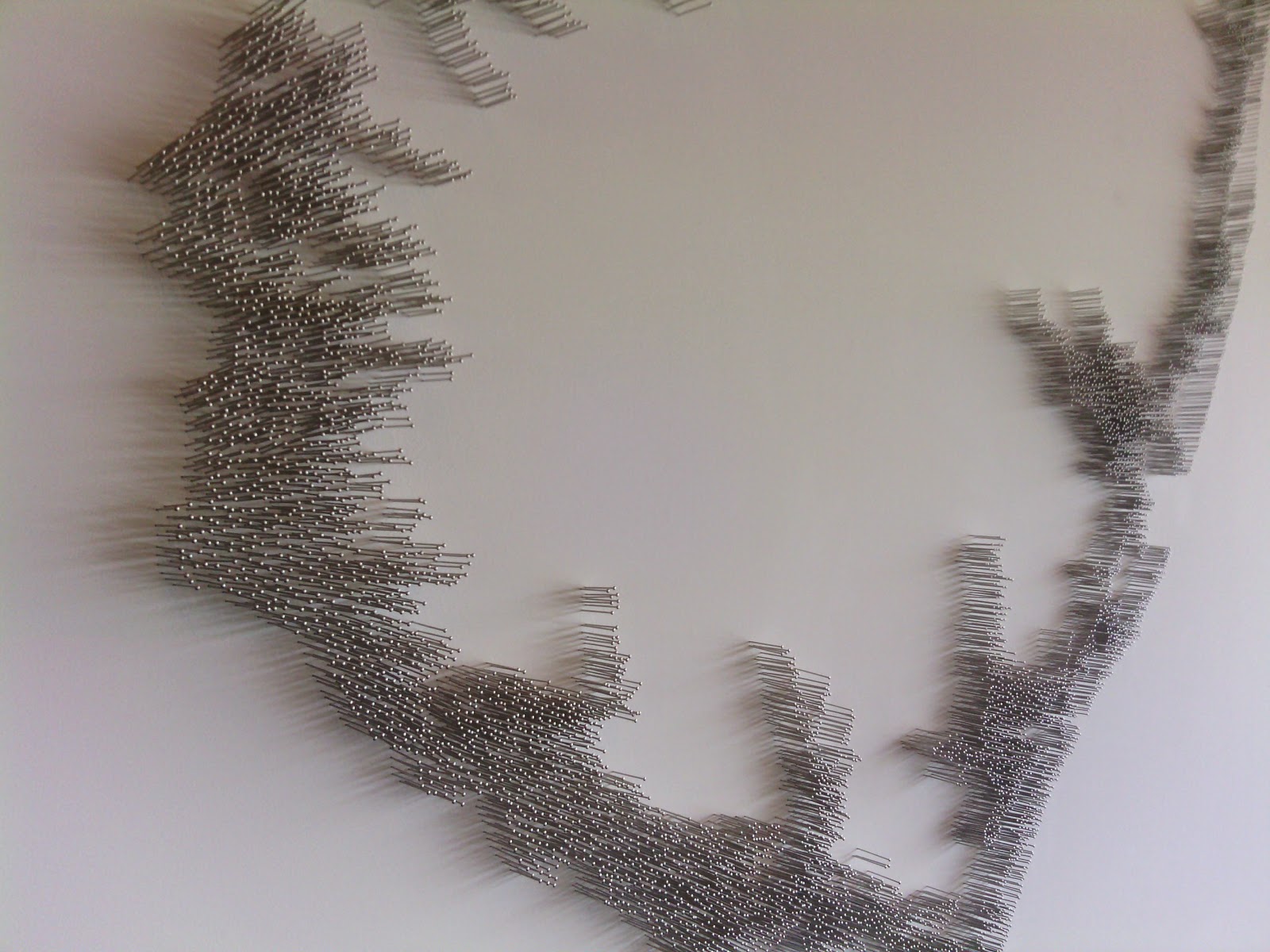 On the way in Susan drove right past these two Roy Lichtenstein sculptures: 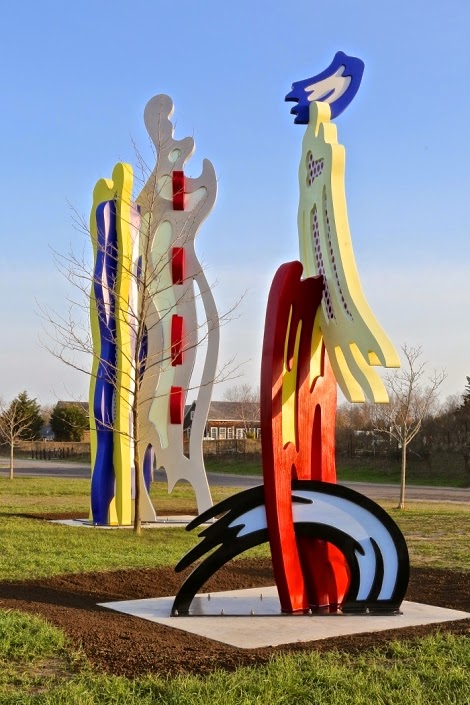 The museum is grandly simple in style with wood post, beam & truss construction (she looked that up), big windows, poured concrete walls, a mod restroom and tight little gift shop. 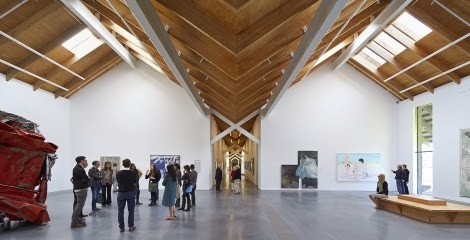 Be good or you'll have to sit outside on the concrete bench: 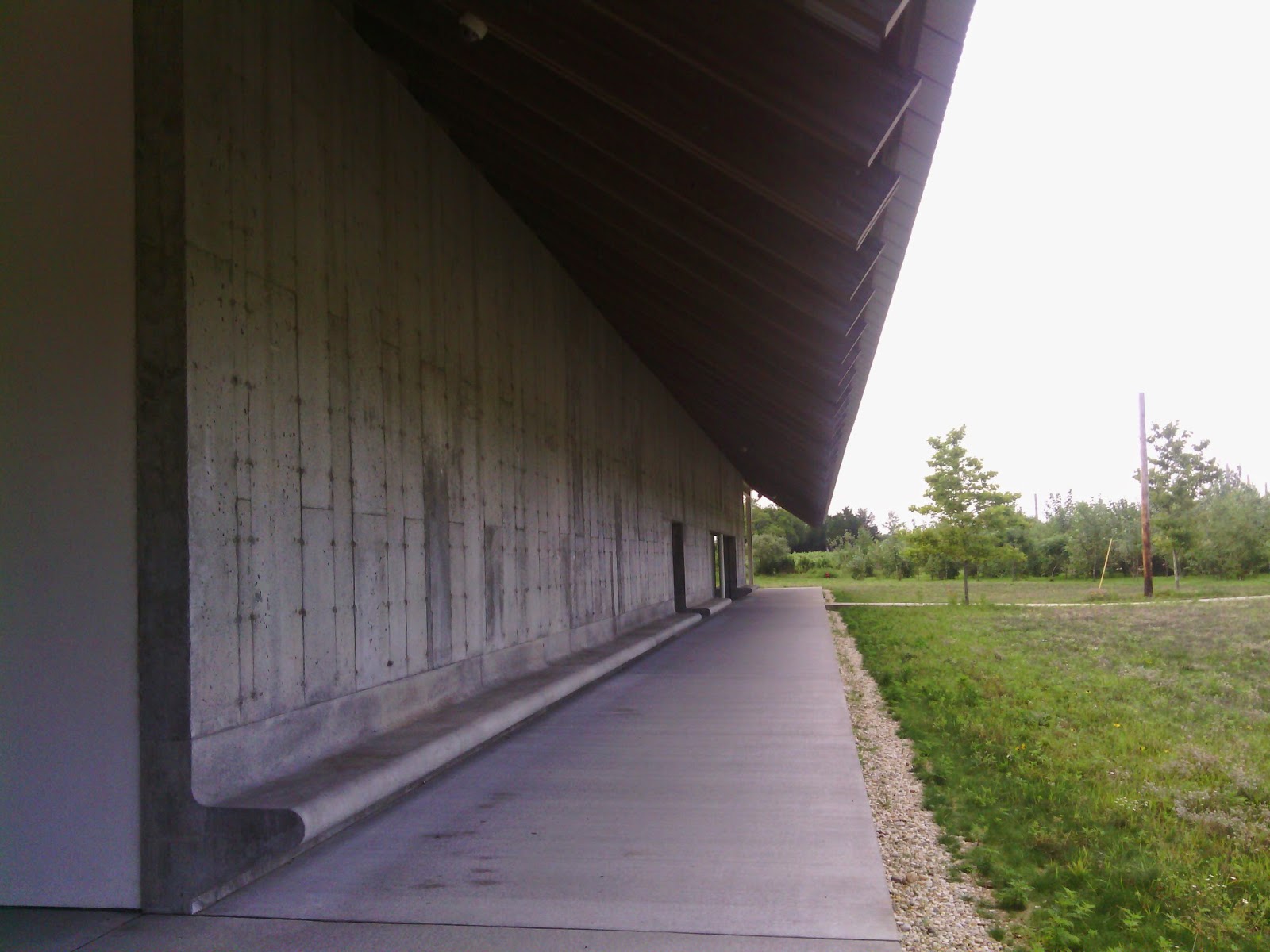 Susan adored this Louise Nevelson composition of wooden junk painted black, her daughter did not: 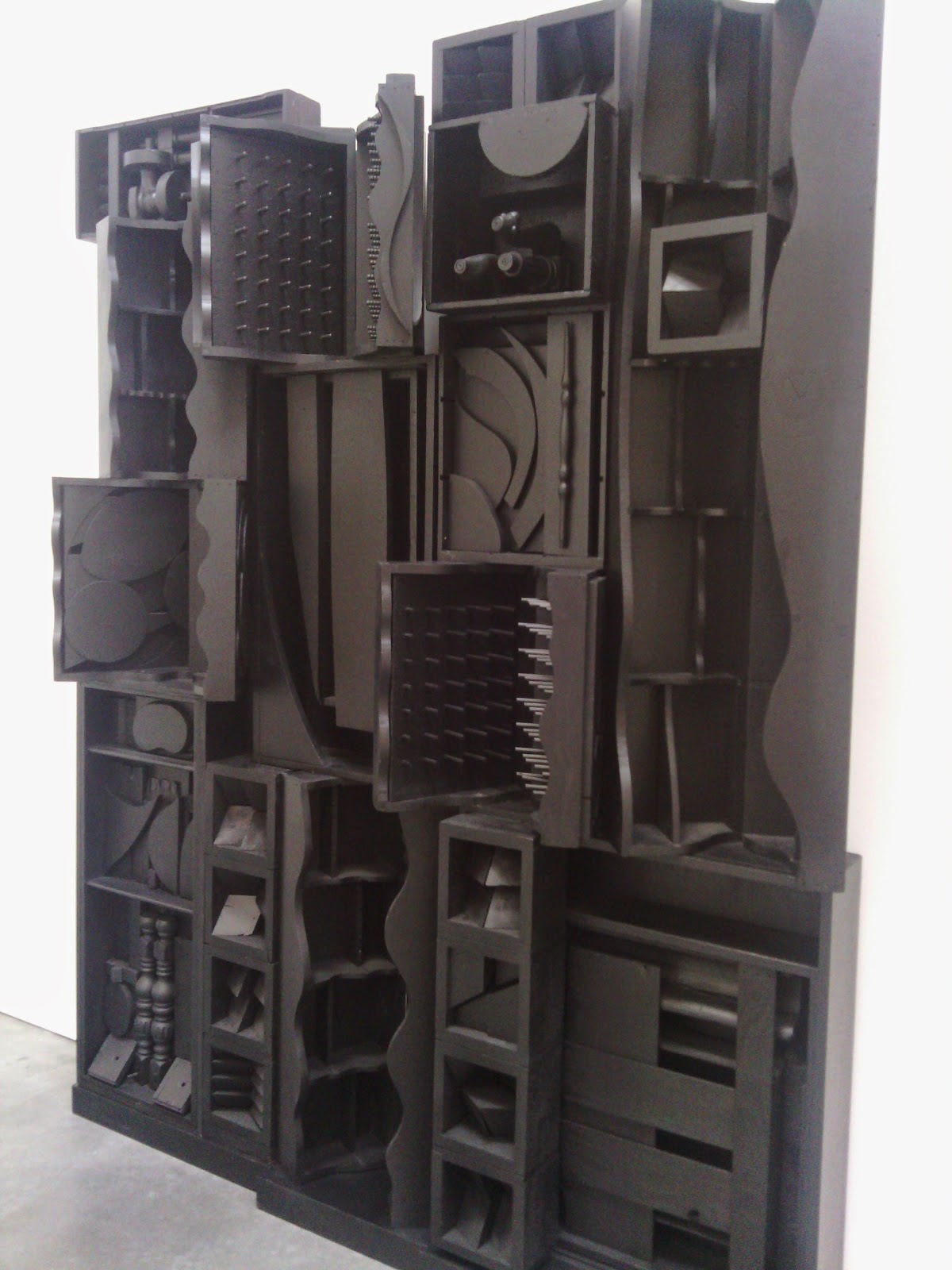 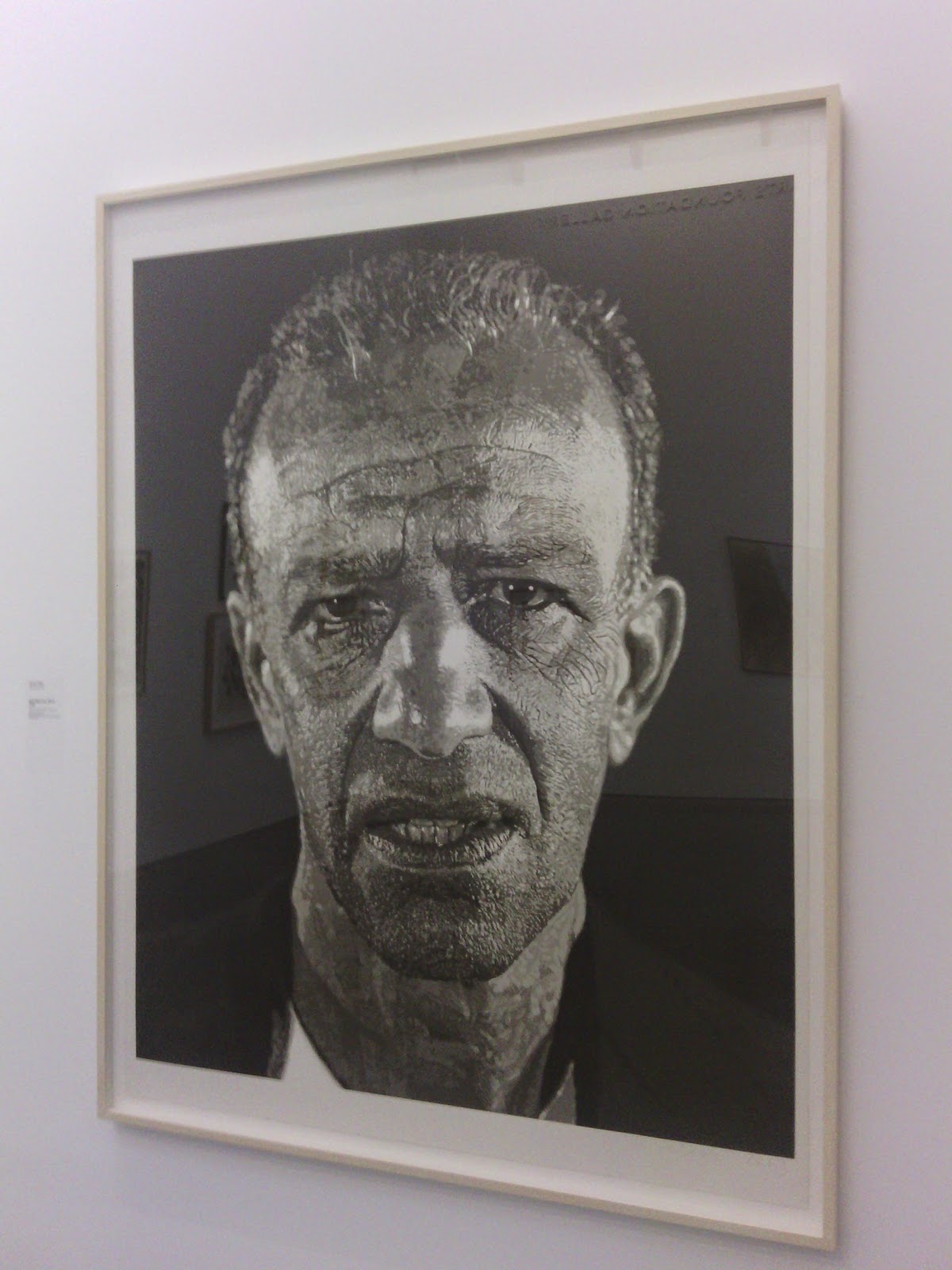 The BIG lemon by Donald Sultan: 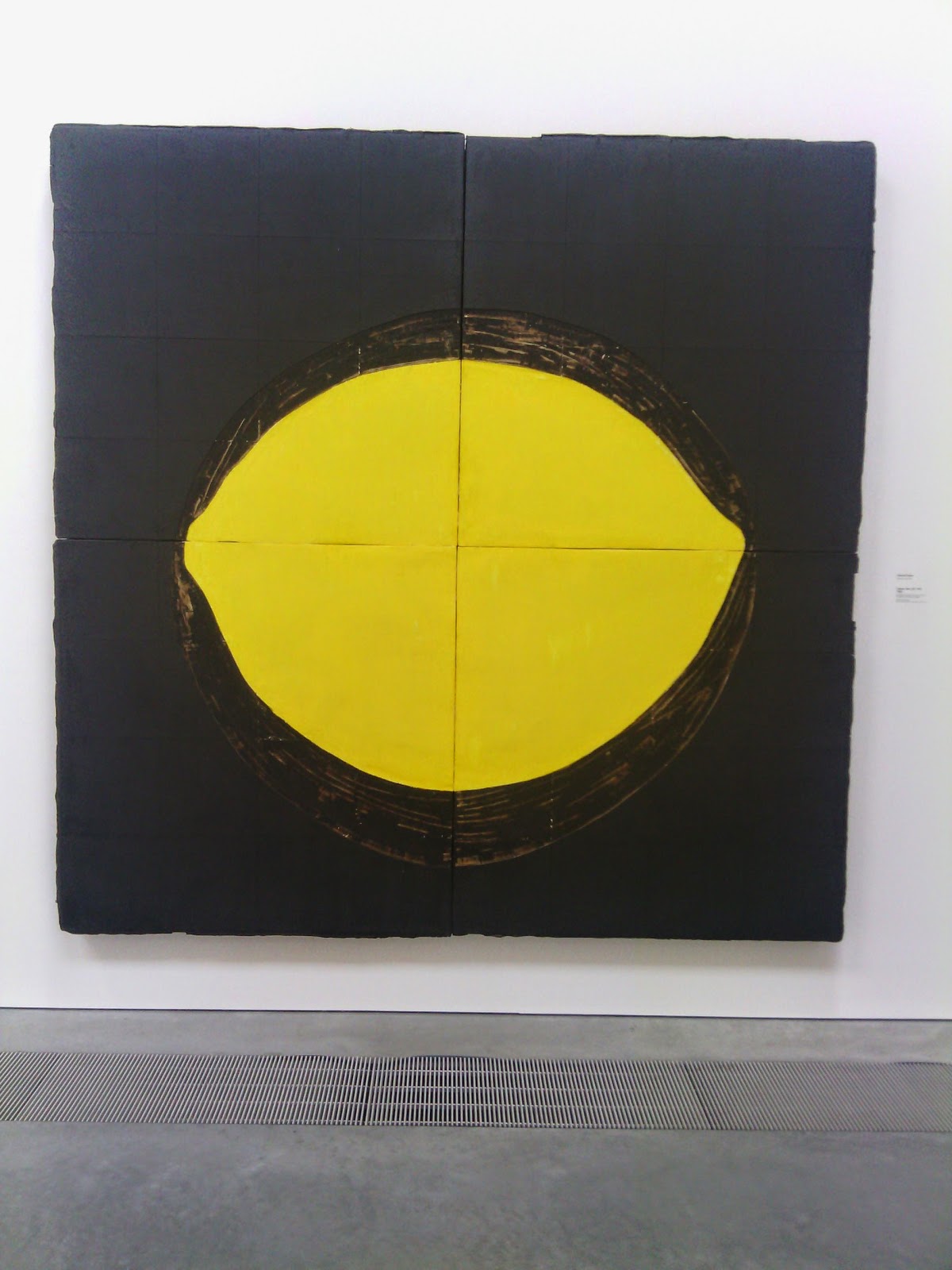 And this nerdy lithograph by Alex Katz: 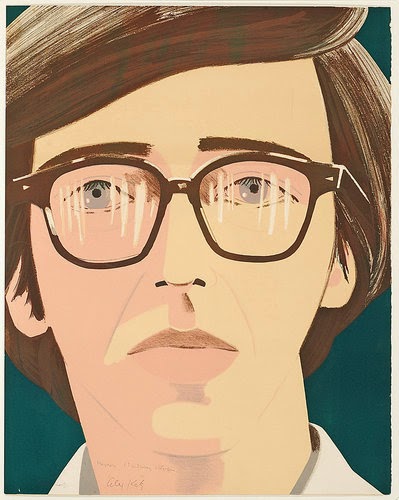 During their trip Susan and her daughter established an unalterable rule: they must never be in each other's company while hungry. 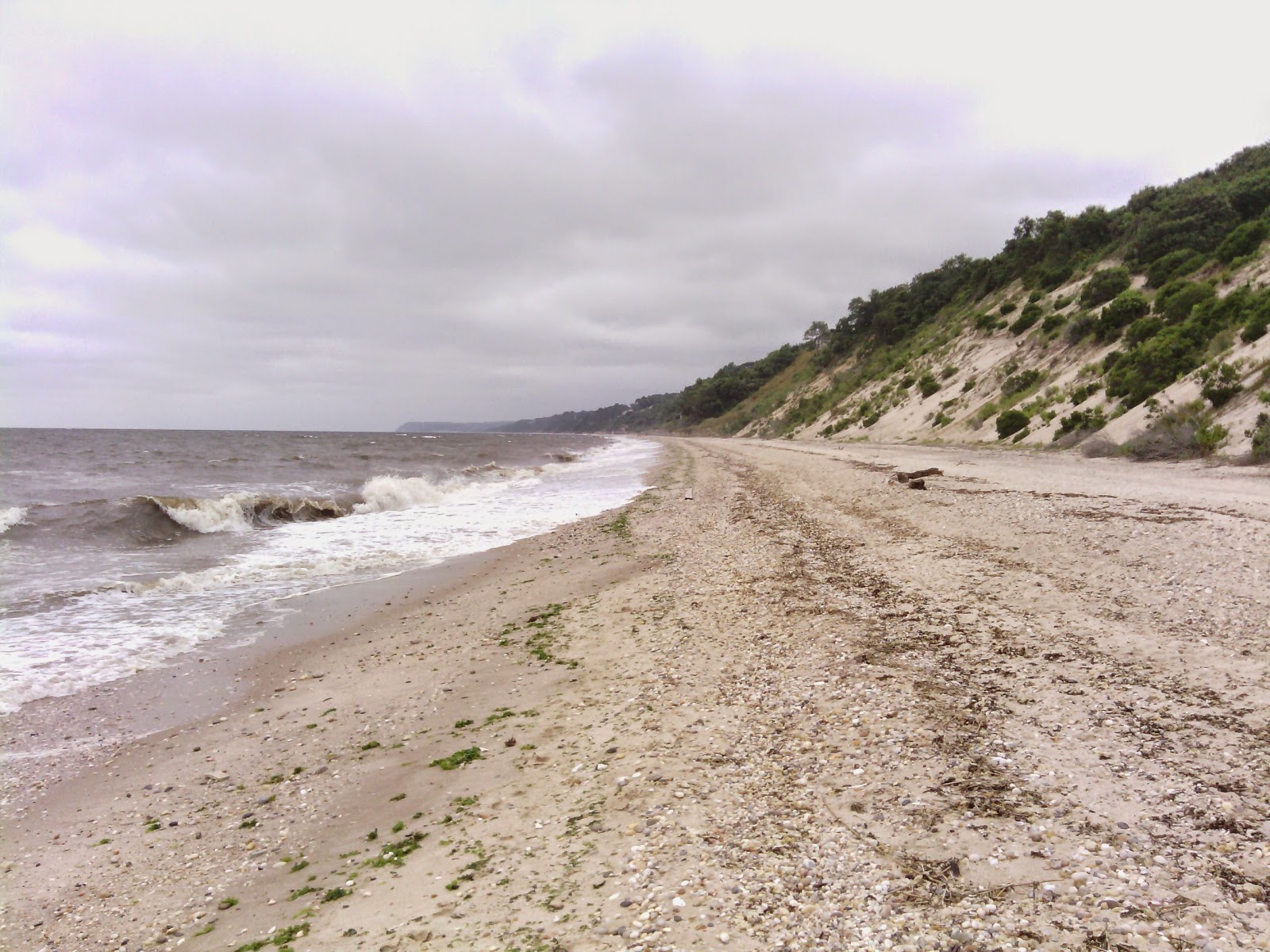 Susan and her daughter took Lucy the pitbull for a walk on the beach.
You see those sandy overgrown cliffs filled with poison ivy? That's how they got up and down. Please note that's just the bottom half in the picture. Nonetheless, it was a lovely solitary walk and a strenuous uphill climb on a gray summer day.

Susan hasn't been doing anything exciting this summer, certainly nothing crazy like going on a vacation, but she's been making ice pops like her life depended on it.
Ice pops, ice pops, ice pops!
She bought a nice Zoku pop mold and immediately got inspired to use coconut milk and mango, then she added herbs.  Unfortunately the black bean chocolate fudgesicle didn't go over very well with the family but she got back on track with fig jam & yogurt pops and blueberry, cardamom & cream from the people's pops cookbook. And, how come no one ever told Susan about Coco Lopez? It's like a can of thick, sweet coconut heaven.

Other than making ice pops, Susan's also been watching Orange Is The New Black with her son, planning equally economical activities with her daughter, slaving away at her resume and following the deterioration of Bey & Jay's marriage.
1 comment: 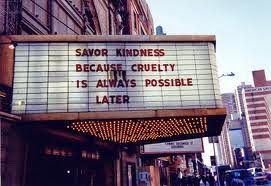