Susan looked at the gold HAPPY NEW YEAR sign still taped above the doorway and realized it was the last new year she'd spend in her house.

Susan's up for a change, she's known for a while she was leaving but has been soft on the departure date. She's headed four states south where there's a bunch of grandkids and one great grandkid growing up without her singular form of interaction. Susan has proven that she stinks at keeping in touch so her plan is to move where she can bang on their doors & see them in person.

It's a good little house she's giving up. It doesn't look like much from the outside, but she made it a nice place to raise her family, and after the husband died it kept them close while they recovered. She remembers the day it first came into her consciousness, a printed page with a picture, one of a dozen houses she & the husband were considering for that weekend's house hunt. 'It looks stupid' she said then crumpled the page and threw it in the garbage. The husband disagreed, 'humor me' he said, and she did.

The clearing out of excess crap began earlier this month when she took the Xmas wreath off the front door & deposited it directly into the garbage. Then she threw out more Xmas stuff. Then regular stuff. The rule is, if she has to stop & think about it, she gets rid of it. A good rule.

Susan's giving herself till the end of this year, she knows it's a long way off, but she wants one last year in New York before she leaves to grow old and die in North Carolina.
No comments:

Susan talked on the phone a whole bunch today, this is her least preferred form of communication, that's why she hates it.

It all started with her Friend Who Talks To Dead People who called for his standard reason; to tell Susan he was thinking of her & he loved her. They discussed how his mom was doing, and her new found softening, a symptom of her advancing age. They strategized when they could squeeze in a trip planning meeting, also known as an excuse to have cocktails, to discuss a long weekend in California next month, and how they would get to JFK on time.

Next Cousin Greg called to conversify* on a number of topics starting with a compliment about Susan's daughter, then imminent, short & long term plans, his woodshop, and their shared grief.

*You may thank Cousin Greg for coming up with this word.

Later Aunt Eileen called to inquire what Susan would like her to bring to a family party on Saturday, shared recollections about keeping company with Susan's mother while she was in the family way with Susan and formulated a plan for a girls-only trip down to see Susan's parents in Florida.

The day ended with a nearly-bed-time call from Susan's friend Cyndi (yes, she really spells her name that way) in which they discussed, for 90 minutes, their kids, their jobs, truthfulness, and voicing compliments.

Susan is aware that this is not the best example of a well constructed BLAHg post, but she's tired and out of practice.
No comments: 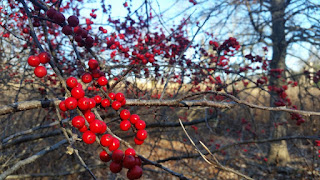 Here's what Susan did on the first day of the new year: