Susan has loved Rigatoni Bolognese for years. She even tried to make it herself the real way with red wine and letting it simmer on the stove for four hours. Susan personally finds it unnecessary to let anything cook on the stove for more than 40 minutes. And four hours? Didn't help. Another issue may be that Susan doesn't like to cook with red wine. She loves Cabernet, but not in her food.

Susan tried a few more times before giving up. It never tasted the way it was supposed to. She assumed the universe was keeping the secrets of the delicious Italian Bolognese out of her Irish-Polish outsider's grasp.

Earlier this week Susan brought together her work pals & her friend who talks to dead people for a spiritualist session. She did not accompany them opting to meet up afterward to find out how things went. Once all together, they talked, drank, ate, and some tried to pick up the check (Disclaimer: not Susan).

Susan ordered an appetizer version of the Pappardelle Bolognese and marvelled at the creamy wonderfulness, with a hint of fennel, that clung to the delicate wide noodles.

Jesus. She had to figure out how to make this sh*t!

Susan ate half the dish & took the other half home to scrutinize, and finish for lunch.

Two days later, she heated up the remaining portion of her obsession, searched for clues in the sauce, and wondered why it was so different from the versions she's made at home. When she was done she sat at her desk messing around on the computer. Scrolling through Instagram she saw something on @nytfood and read the accompanying recipe for White Bolognese. 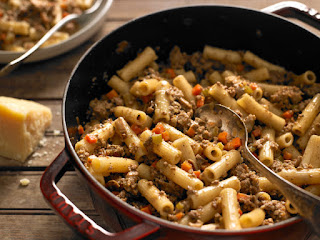 WHITE Bolognese?
Gasp!
No tomatoes and no red wine!

She was back in business with the universe.
No comments:

Susan formerly worked for a New York State government agency. She traded being a depressed stay-at-home mom for an opportunity to work in the greatest city in the world. This went on for a few years until she couldn't hack the four hour (round trip) commute any longer & transferred closer to home.

While Susan's NYC job was wonderful, Susan's suburban transfer job was dreary. She can tell you why, but not today.

Eventually her work situation drove her insane and she began to put together a resume and some good quality references, one was a local Assemblyman who was also friend of the husband. Susan had met him a few times but their relationship was very cursory and she wanted to let him know that she was using him as a reference. Toward that end she wrote him a letter.

Here's the letter Susan sent, recently unearthed from beneath a pile of notebooks, school art projects and old magazine articles:

You and I have met a few times over the years, and I would like to take this opportunity to reintroduce myself.

I am preparing to look for a new job and my husband Patrick has insisted that I use you as a reference on my resume. Even though he assures me that no one would ever contact you, I feel as though you should have a brief overview of who I am just in case.

I have been working for the NYSDOH since 2001 as a temporary employee, currently I'm out in the desolate wasteland of (name of town redacted) with the Adult Homes Unit. As much as I always dreamed of a job where I could exist under the radar, thanks to my current position I realize that I much prefer an environment where my superiors actually care if I accomplish something.

I am an office grunt-worker who is fluent in proper English and can get along with just about anyone. Quite often I am used as a liaison between associates who prefer not to be in each other's company. No task is too small or unimportant for me to sink my teeth into.

I don't drink (on the job), tattle-tale or make trouble. I am organized, quick to learn and enthusiastic (to a point). I enjoy waking up, putting on clean clothes and going someplace every day, if I have to work in order to accomplish this, so be it.

I hope that I've provided you with an accurate picture of my personality and abilities.