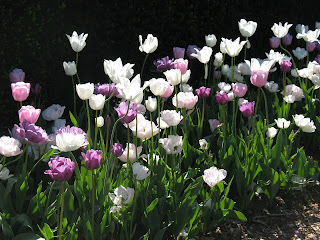 Susan neglected to tell you about the most amazing part of her trip to the Brooklyn Botanic Gardens yesterday.

It required that Susan make an aggressive U-turn on Flatbush Avenue, zoom up to the car exiting her prospective spot and sit there while being cursed at by all the inner city drivers she beat out.

Susan went to the Brooklyn Botanic Gardens to see the cherry blossoms but they bloomed a month early & blew away last week.


Instead she saw Japanese folk dancers and Samuari sword fighters and bonsai, tulips, bluebells, wisteria, koi, water lilies and peonies then stood in a grove of lilacs until she was woozy from their fragrance. It was a nice day. 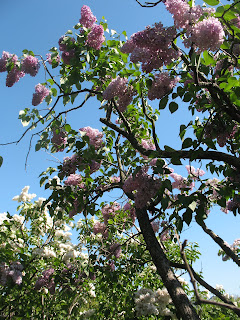 Susan saw a sign outside a farm stand advertising cukes, she doesn't like when the names of vegetables are abbreviated. Shrooms drives her crazy, don't say that around her. She also hates when people tell you their baby is an old soul. What is that anyway? Susan assumes they're saying we're a**holes. Same with follow your heart. How can Susan take you seriously when you say that? She can't, that's how.
There's so many phrases that Susan hates but she's tired now & will write them down later.
4 comments:

Susan really hates the thankful list, each day it gets more laborious. She sits for an hour wracking her brain for 5 stupid things. F*ck being thankful, she's pulling the plug.

Susan can't wait to rip open the newspaper every day and catch up on the lies, the money, the crazy baby-mama,the aliases, the laser like accuracy of the deceased wife, the immune aide, the dopey socialite and the former ambulance chaser who got too big for his britches.

Susan prays there'll be a made for TV movie.
4 comments:

Susan is taking the day off from being grateful to share this article, make sure you look at all the pictures.
3 comments:

Today Susan is thankful for:

Today Susan is grateful for:


Today Susan is grateful for:

Susan attended a seminar during the week and was manipulated by the speaker to make a rash commitment in front of his audience. Susan's good with addressing a room full of people, but she doesn't like when she's got to pull something out of her ass to fulfill a requirement she does not value.

The seminar started out to be very promising, the speaker was energetic, Susan liked her table mates and she was very excited about having a day away from the responsibilities of Acme Sweatshop. It soon became clear that content of the seminar was not what she thought it would be. Nonetheless, she would participate and learn then be out the door by 3:30pm. Not bad.

After the lunch break Susan's attention span really dropped off and she found herself daydreaming just like she was back in fifth grade. When the seminar preacher made everybody stand and answer a simple question Susan was unprepared.

What was Susan willing to commit to doing differently?

She had honestly answered a similar question before lunch and now she had to come up with something else. As she listened to the other participants give their commitments she reviewed her sparse notes. Nothing.

Now it was Susan's turn and she blurted out the least likely thing she would ever do;

Each day I will write down 5 things that I am grateful for.

OMG. Who is she now, Oprah? Susan felt sick inside. She had lied about maintaining an attitude of gratitude to a room full of strangers whom she would never see again.

When she got home she was troubled by what she had done. She lied.

Susan used to be a liar. She used to lie to everyone except the person she would ultimately marry. Through a Herculean effort and self discipline she made herself become a truthful person. She might not tell you the whole truth, just what you need to know and she won't tell you that you look good in something when you don't. Neither will she differentiate between little white lies because they have just as much impact as big ones.

She does, however, reserve the right to lie about matters of opinion like saying that your party was fun or that your expensive kitchen remodel is beautiful.

So, for the next week Susan is going to post 5 things she is grateful for starting with: 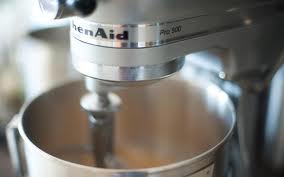 Susan came home with the most wonderful hand me down gift from the husband's daughter last week.

Susan had been admiring the impressively heavy workhorse on a shelf and the next thing she knew it was sailing through the air in a haze of fairy tale glitter right into the trunk of her car.

Susan put her f*cking awesome gift to use the morning after she got home by mixing together some softened cream cheese, cheddar cheese, bacon, cilantro, cumin, chipotle & lime, forming it into a ball then rolling it in roasted nuts and more bacon.

Hello everybody, Susan's back!
She was down in the areas of North Carolina with the highest concentration of former New Yorkers visiting the husband's daughters.

And his four grand kids;
a two, twin threes & a five.

Susan did things she doesn't normally like to do such as handle caterpillars, sit on the floor and play with blocks, come within kissing distance to a cow, eat her broccoli with enthusiasm, sing the Clean Up song from Barney, assist as necessary in the potty, run across the lawn like a zombie, bake a cake using imprecise measurements and exhaust herself by pushing a kid in a small car around a bumpy back yard.

She also avoided a hated environment by texting her way through an amusement park then sneaking off for a solitary margarita.

Susan was relieved to find only the tiniest amount of little kid bullsh*t in evidence. There was no overt manipulation, no whining, hysterics, tantrums or other unpleasant and childish behavior, just a week's worth of excited conversation from happy children.
3 comments: 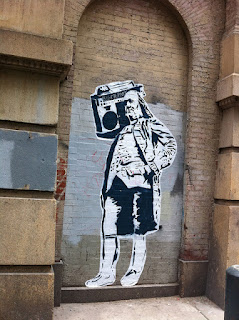 Susan spent 48 terrific hours in Philly with her family. You may recall that the last time she was there she had a spontaneous claustrophobic episode, but she stayed away from that place and everything worked out fine.

This time she went over to South Street and stood on line for an hour  to eat a divine sandwich made by a fella wearing a hairnet over his beard. She wasn't even bothered when she saw his giant can of Cheese Whiz.

Afterward, Susan walked down the street to PAT where she found her *favorite book and bought it along with some other stuff including a horribly ugly metal thing that the daughter liked.

She saw many wonderful things in the neighborhood, including but not limited to a confident young lady strolling in her black and gold cat suit with the strategic cut outs, entire buildings clad in intricate mosaics and mirrors, some neat graffiti and record stores.

They took the long way back to their hotel and walked through Chinatown for bubble tea and all the other things they love about Chinatown like seeing entire pig heads in store windows.

The next day they went to see this exhibit and met up with the biggest afro outside of Sly Stone.

Before they left Susan found that Philadelphia has the most charming little cobblestone back streets, the best music blasting out of their car windows and the largest number of men dressed like women that she's encountered in one weekend.
3 comments:

A gentleman roughly the age of Susan's old man offered to massage her feet today when he learned that her shoes pinched.

It was a shame that she could not accept.
6 comments:

Verbatim conversation initiated by a person of suspicious cleanliness as he and Susan and her little sister all exited the NYC subway system.

Are you a rider?

Susan thought perhaps he was going to ask for directions and was getting ready to point him back toward the subway map.

Am I a writer?

Susan thought perhaps he was going to ask her how to write something down.

It was evident that he was getting aggitated with Susan but she still didn't understand what he was trying to communicate so she asked one more time for clarity;

Do I ride or do I write?

Yes, I can write.

Are you a WRITER?

The time limit for Susan's interest in continuing the conversation ran out.

As they walked away Susan's little sister said quite cheekily maybe he recognized you from your BLAHg.
2 comments: