Black outs are so boring.

How many games of Bananagrams can one person endure? When the daughter dragged out the puzzle Susan opted to wash all the dishes instead. After the dishes she went down to the river to beat the clothes on a rock then she took a cold shower.

When Susan’s little sister invited the family over to her house they grabbed everything that had a power cord & sped away from Frontier Town.

It was little sister’s 23rd wedding anniversary and the hurricane necessitated the cancellation of her weekend plans to hook up with her husband who still works and lives two states away. Instead, the two families, minus one brother in law, made a lovely dinner then watched Jersey Shore.

When Susan’s crew returned home to the pitch blackness of their neighborhood the son commented about the amount of stars that could be seen in the sky and how the longer you looked at them the more of them you could see.

It was a very nice observation.
3 comments:

Friday night Susan began getting ready for the hurricane by purchasing a 504 piece puzzle for the daughter. They wanted to get in a little puzzle practice so they spread it all over the table and set to work. At the end of two hours, with only four pieces connected, they dumped it back into the box.

Saturday Susan continued her preparation by taking down her wind chimes. She also clipped all the sunflowers from her front yard and put them in her dining room. A quick check of supplies determined there was more than enough liquor and ice cubes to make it through to Monday. There was also enough coffee and reading material.

And speaking of coffee, Susan's new countertop necessitated that she trade up to a French press and now she and the husband are hooked. Hooked!
They can't go back.
7 comments:

Susan f*cking HATES the Pinkett Smiths and prays every night that horrible things happen to them.
Will you pray too?
O, (insert the leader of your personal belief system), we beseech thee, please give Jada Pinkett Smith the most miserable itch in her lady area and make all the Pinkett Smiths' money fall through a hole in their pockets and let their children get pimply and let a rat die behind the all refrigerators in their beautiful houses and let their help all give unflattering interviews and let their tongues only taste anchovies.
Amen.
4 comments:

Susan and her family went to the outlets looking for school footwear and Susan came how with these in brown.
You lost a little respect for her, didn't you?
Well, Susan already owned these but her little sister has declared them so ugly that Susan only wears them in the house. They're wonderfully comfortable for inside the house, she keeps them right next to her bed so that her bare foot never has to touch the floor.
Susan avoids walking in her bare feet at all costs, unless it's impossible. Like if her footwear is a few steps away and she can't hop or walk on her hands or anything.
She likes these too, she has no defense.
10 comments:

You all give me alot to complain about.
1 comment:

Susan was in the middle of her regularly scheduled morning hot flash when she stepped outside in search of a cool breeze and walked sweaty-face-first into a spider web.

It was a big one.

It got in her mouth and her hair, it stuck to her fingers and even though she spat it out and washed it off it still left sticky remnants.

Susan and the husband did something only rich people do, they went out and purchased a granite counter top. Oh, it's a lovely piece of black granite flecked with brown and it'll get turned into a wonderful counter top with a bevelled edge and a fancy faucet and soap dispenser just like the Rockefellers must have.

And, normally she would request that everyone wish the husband a HAPPY BIRTHDAY, but since he doesn't read her BLAHg he'll never know the difference.
6 comments:

Susan donated blood on the Bloodmobile this week, it was quite the sponatenous decision. She saw an opportunity to atone for blowing off the blood drive at the Knights of Columbus earlier in the week and took it.

Have you ever been on a bloodmobile before? There's not much room. Susan's bloodmobile had reclining seats that ran along the sides and two teeny little interview rooms in the back.

Susan sat in the teeny room being interviewed by the phlebotomist and took notice of the extreme lack of space. The room was claustrophobically small and Susan was uncomfortable. There was probably more elbow room between two people having sex than there was between her and the phlebotomist. But, Susan was there to get stuck with a needle and have her blood drained for twenty minutes and was not going to let anything derail her from that goal.

She was good with the whole thing, then she had juice and cookies.
3 comments:

Susan's husband is an idiot.
She can say that because she's been almost exclusively complimentary for many years.

Lately there have been a bunch of trips thru the fast food window because Susan's lazy and doesn't care about her family's health.
During each one of these trips the husband mispronounced chipotle as chipotey.
She let it go and let it go until it drove her crazy and she was forced to correct him. Susan's husband argued that no one pronounces it that way.

Oh, really? No one pronounces it properly?  She immediately enlisted help from the girl handing the food bag through the window.

Please tell my husband how you pronounce chipotle, she requested.

End of ridiculous argument with someone who is normally not a f*cking idiot.
3 comments: 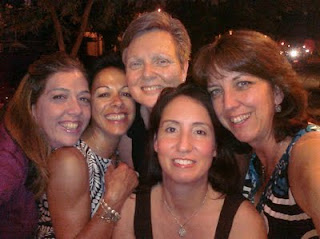 Susan and five sixths of her cousins met up for their annual summer dinner on City Island﻿. Cousin Caroline was unable to join them, but pictured from left to right are Cousins Veronica, Lisa, Susie, Kathy and Melissa in front.

The cousins always meet at The Black Whale, which has a lovely garden out back under the trees. They stay late into the evening laughing, talking and eating. In fact, Susan's profile picture was taken from one of those summer dinners.

Anyway, it was raining this year so they couldn't eat in the garden.
Inside, the restaurant was filled families and children, crying babies, groups of friends and one slightly older couple seated at a small table diagonally across from the cousins.

It was a terrific evening filled with laughter, happiness, funny stories, and conversations about Captain Andy's upcoming deployment and Cousin Veronica's winter wedding.

OMG, Susie loves her cousins so much!

During the evening Cousin Susie's little sister, Cousin Kathy mentioned that the couple at the small table kept looking over at them. Everyone checked to make sure that their boobs hadn't popped out then went on with their merriment.

A little while later, Cousin Kathy mentioned that the female portion of the couple actually turned around and glared at the cousins in a very dramatic manner.

They thought it odd, but continued with their conversations.

After a bit Cousin Kathy said 'I think they threw something at us' which got the cousins' attention. However, upon closer inspection there was nothing that raised suspicion about the couple at the small table so the cousins went back to discussing Cousin Veronica's wedding dress and deciding what dessert they'd like to order.

Then a big SHUSH! was lobbed at them from the small table at the same time Cousin Kathy discovered the projectile; a wadded up sugar packet which she offered as Exhibit A.

The gloves were off!

The couple paid their check and left while comments went back & forth between the two tables. The cousins waved bye bye and blew kisses as the glaring woman gave them the finger. But when the the departing man told Cousin Veronica 'No one cares about your wedding dress' Cousin Kathy returned the wadded up sugar packet by bouncing it off his head.

None of the other diners even noticed what was going on and the cousins sat there for another hour happily enjoying each other's company before making the long drive home.

Susan's little sister made her see
The Psych Furs play a free show overlooking the water on a beautiful Friday evening.
Damn her!
No comments: 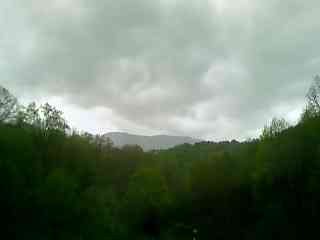 Dueling Banjos, NC as photographed by Wild Bill
No comments:

Susan took a lovely shower as she does every morning. She let the hot water blast away at her stiff bones, relax her tense shoulders and bring some mobility back to her cricky neck. After this she would be in good shape to be able to bend over and wash her toes.

Anyway, she did everything one does in the shower then reached for the nearest towel. She started from the middle and worked upward when she got to her face she it became clear that she was drying herself with the dog's towel.
6 comments:

Susan's computer was not where she left it, a brief investigation revealed that the daughter had moved it when she tried to crack the password.
Her choices were
CLEAN
then SHUT UP
then PICK UP YOUR SH*T.
Susan was impressed, the kid was on the right track.
5 comments:

Susan's husband forced her to finish the kitchen this weekend. The cabinets were done but they still had no hardware, the tile back splash had no grout and the walls had to be painted.

Susan never grouted anything before. It was easy enough but she's not interested in tiling or grouting ever again. She'd be very comfortable hiring someone for that purpose.

The husband took care of the hardware while Susan started to paint. Halfway through she realized that the color off.

She closed up shop for the day and decided that she would reassess in the morning. Everything looks better in the daylight after a restorative night of sleep.

The next morning Susan sent the husband back to Home Depot for a new can of paint.
3 comments: